Westpac has revealed it made a $546 million gross gain from its investment in Coinbase, leading to $122 million in performance fees for its in-house venture capital fund, Reinventure.

Reinventure, co-founded by Simon Cant and Danny Gilligan, is a fintech-focused venture capital fund that was set up within Westpac in 2014, when the fintech revolution was in its early stages. In 2015 it took an early stake in cryptocurrency exchange, Coinbase. 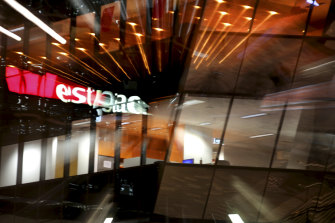 Westpac’s gain on its Coinbase investment was $546m, before costs from performance fees and tax.Credit:James Alcock

Coinbase made a blockbuster debut on the public markets this month amid a recent surge in the price of bitcoin, and Westpac on Monday revealed the extent of its gains from the investment. The bank said that based on pre-float trading in Coinbase shares, it had made a $546 million gain, before costs from tax and performance fees.

Westpac said the Reinventure fund had held about 1.2 million Coinbase shares, and since the float on April 14 the bank had sold down about half that stake.

As a result of the huge windfall for the bank, Westpac said it had made provisions for “Reinventure performance fees of $122 million linked to the revaluation of Coinbase.”

After accounting for costs, including tax and the performance fees, Westpac said its net gain on the revaluation of its investment in Coinbase was $288 million.

The windfall from the Coinbase investment comes as Reinventure has indicated it will seek funding in future rounds from external investors outside of Westpac, though the bank has not commented on this publicly.

Details of the bank’s Coinbase windfall were disclosed in a market update that said Westpac’s first-half profit next week will take a $282 million hit from provisions for refunds and litigation, write-downs and a range of other “notable items.”

The other items included $115 million in write-downs of software and other intangible assets, $56 million in costs associated with ending its relationship with IOOF, and the writedown of $84 million in goodwill on its lenders’ mortgage insurance business. 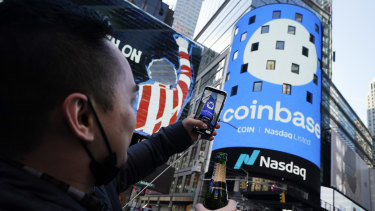 Coinbase made a big splash when it listed on Walll Street earlier this month,.Credit:AP

Westpac will be the first major bank to report its half-year earnings next week, with the lender expected to unveil a plan for significant cost cuts.

Westpac said $212 million of the notable items were announced in its first quarter results, and $70 million of the impact occurred in the most recent March quarter.

A concise wrap of the day on the markets, breaking business news and expert opinion delivered to your inbox each afternoon. Sign up here.