The convulsions and implosions in the crypto universe are galvanising regulators and legislators around the world, almost ensuring that “something” will be done to draw at least some crypto assets into conventional regulatory nets.

What that something might be is widely open for debate, with regulators torn between competing arguments for protecting consumers and financial stability and the potential for unregulated crypto to drive innovation and efficiencies in financial systems. 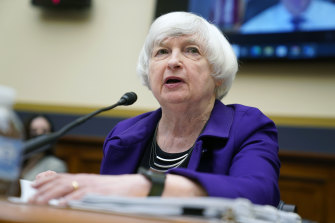 US Treasury Secretary Janet Yellen called on the lawmakers to legislate for federal supervision of stablecoins by the end of this year. There’s a similar push for urgent regulation in the UK and Europe.Credit:AP

In the US, UK and Europe, however, the events of last week – when the value of one of the big stablecoins was wiped out and the largest “broke the buck” — have added urgency to proposals to regulate those particular crypto assets.

Last week the algorithmic stablecoin TerraUSD and its sister coin Luna were obliterated after something akin to a panicky run developed. The largest of the stablecoins, Tether, supposedly backed dollar for dollar by conventional high-quality US dollar-denominated assets and therefore always worth $US1, was “de-pegged,” trading as low as US95 cents.

Just over a week ago TerraUSD was trading at $US1. Terra was supposed to trade close to $US1. It now trades, if it can be traded, at US12 cents. Luna is priced at a fraction of a cent. Tether has recovered and is now trading a smidgen under $US1.

The nature and performance of those two stablecoins underscores the difficulties of devising an approach to regulating them. While their goal – a direct peg to the US dollar – was the same, their mechanisms for achieving it are very different.

Tether is a “conventional” stablecoin. It holds a basket of US dollar assets – actual cash, Treasury bonds and other fixed interest securities – that supposedly match the value of the tokens on issue.

The qualification is that it doesn’t disclose the nature of its assets and there have been some suspicions (and a settlement with the US Securities and Exchange Commission over its assertions) that the match isn’t as perfect as it claims and/or it is holding some less than high-quality assets to generate higher income returns than it would achieve by investing in Treasuries.

TerraUSD is a very different beast. It’s an algorithmic stablecoin that relies on financial engineering to achieve the peg with the US dollar. Self-evidently the algorithm was found out under pressure last week.

In simple terms, TerraUSD relied on an arbitrage with its sister coin, Luna, to maintain its one-to-one peg with the US dollar. The coins are exchangeable, with $US1 of Terra supposed to be always worth $US1 of Luna. 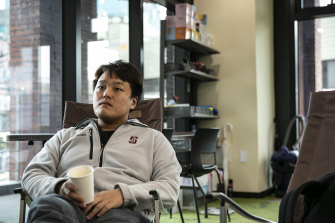 In theory, that should ensure TerraUSD, while a purely virtual construct with no physical assets to support it, would always be worth $US1.

In practice, once investors lost confidence last week it ignited a self-fuelling spiral to near-oblivion for both.

Less than a month ago Luna had a market capitalisation of more than $US30 billion ($42.9 billion) and the TerraUSD market was valued at more than $US18 billion. Today Luna is essentially worthless and Terra is valued at less than $US2 billion.

It is the magnitude of the meltdown and the key role stablecoins play in the wider crypto market that has regulators unsettled. The coins provide a conduit between the conventional financial system and the crypto universe. Within the market for crypto assets they provide the currency and an efficient and supposedly safe mechanism for facilitating transactions.

The sooner there is appropriate regulation in place the better – for crypto investors as much as for the future stability of financial systems.

They are regarded as central to the brave new and potentially (for traditional finance) transforming frontier of decentralised finance and the smart contract-enabled applications using the blockchain technology that aim to replicate and displace conventional financial services.

The structure of the more conventional stablecoins like Tether, holding billions of dollars of conventional assets, and the potential of “DeFi” to generate massive efficiencies and consumer benefit explains the tensions in the debate about whether or not to regulate them.

It’s a more focused discussion than the broader issue of whether crypto assets generally should be regulated because the potential threats and benefits that stablecoins and their role in supporting DeFi might generate are of much greater systemic consequence, or at least could be.

Janet Yellen, who has called for stablecoins to be regulated in the past, told a congressional hearing late last week that she wouldn’t characterise Tether’s “breaking the buck” as a real threat to financial stability but added that stablecoins are growing (or were growing) very rapidly.

Yellen called on the lawmakers to legislate for federal supervision of stablecoins by the end of this year. There’s a similar push for urgent regulation in the UK and Europe.

In the US the Treasury Department and Federal Reserve Board and other finance sector regulators want to be able to regulate stablecoin issuers in a similar fashion to the way they regulate traditional financial institutions, imposing capital and liquidity requirements along with far greater disclosure and ongoing supervision.

That would reflect the view that stablecoins could eventually be a threat, not just to consumers, but to the system if they grow large enough that a run similar to the one that wiped out TerraUSD and destabilised Tether momentarily, were to develop and the issuers were forced to dump assets to meet redemptions.

The lack of transparency in cryptos makes it impossible to understand whether there is something beyond a broad correlation between what happens in crypto markets and developments in traditional securities markets.

The extent to which traditional financial institutions like banks, investments banks, hedge funds and wealthy individuals have become involved in the crypto market – they now account for something close to, if not greater than half the activity – suggests the potential for spillover effects.

If a Tether or a TerraUSD is akin to a money market fund then a crisis of confidence and a run on a crypto asset could, if the stablecoin sector in particular were to grow large enough, export liquidity issues into the conventional financial system.

The sooner there is appropriate regulation in place the better – for crypto investors as much as for the future stability of financial systems.