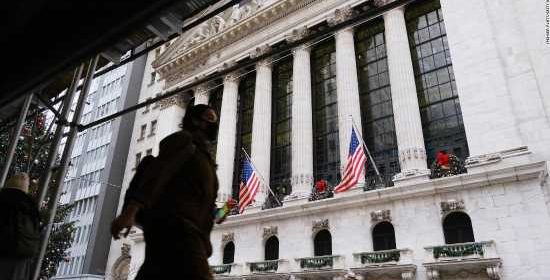 New York (CNN Business)Volatility is back on Wall Street: Stocks are falling as central banks around the world turn more hawkish and worries about the omicron variant increase ahead of the holidays.

US stocks mostly added onto their losses from the prior session, with the Dow (INDU) falling as much as more than 600 points Friday morning before recovering some of its lost ground. By the late morning the Dow was down 0.9%, or roughly 330 points. Similarly, the broader S&P 500 (SPX) was trading 0.5% lower after recouping some of its earlier losses.
The Nasdaq Composite (COMP), which was the biggest loser Thursday as tech stocks came under fire, also initially traded in the red. But then it turned positive, up 0.2%, in the late morning.

Earlier this week, the Federal Reserve announced it will roll back its pandemic stimulus program at a faster pace. It also revealed that the bank’s policymakers expect more interest rate hikes next year than they did just a few months ago.

The Bank of England went even further and actually raised its benchmark rate this week. Central banks around the world are turning hawkish to combat the high inflation spurred by the recovery. In the United States, one measure of prices climbed to its highest level in 39 years in November.

Even though the Fed’s move was no surprise, it’s bitter medicine for the market.
Meanwhile, the spread of the latest Covid-19 variant, omicron, continues to be a concern around the world. Investors are trying to assess how likely new lockdowns are and what they could do to demand. The fact that the Christmas holidays are so close also brings back bad memories of last year’s winter surge.
Source: Read Full Article