Drugmaker Mesoblast has been forced to go to the market to secure a private placement as it waits for critical milestone payments from partners to come through, having burnt through $77 million in cash in past six months.

Shares in the stem cell treatments developer were halted on Friday ahead of details of on an “announcement by the company in relation to a proposed private placement to a targeted industry investor”.

Later that evening Mesoblast dropped its half-year financial results that showed the business was running at a $US48.9 million loss, had $US77.5 million in cash on hand and needed cash from its existing partnerships to land “to meet our forecast expenditure and continue as a going concern”. The firm had outflows of $US60.1 million for operating activities. 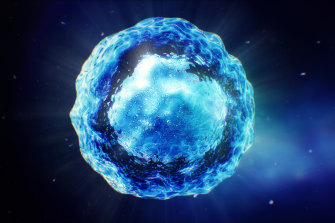 Mesoblast shares have been on a rollercoaster the past six months but the company is yet to get US regulatory approvals.

Mesoblast’s auditors PwC noted in the half-year report the company needed the placement and partnership income to be able to continue operations.

“The ability of the group to continue as a going concern and realise its assets and discharge its liabilities in the normal course of business are dependent on cash inflows from successfully completing the private placement, as well as from existing strategic and financing partnerships,” the auditor’s report said.

Analysts at Bell Potter noted last month that Mesoblast’s balance sheet could come under pressure in the 2022 financial year if there were any hiccups with agreements and payments from partners Grunenthal and Novartis.

Bell Potter analyst Tanushree Jain said while there were scant details of the company’s planned placement, a capital raising would take the pressure off the company’s balance sheet.

“We believe a cash injection at this point as long as it’s not at a massive discount or overtly dilutive, with some form of strategic investor should be viewed as a positive for the company,” Ms Jain said.

“We flagged a few weeks earlier that with $US77.5 million cash in hand at end of December, Mesoblast’s cash position was vulnerable to the continuance of the Grunenthal and Novartis deals and the near term cash inflow from them.”

The stem cell developer’s partnership with Grunenthal relates to the commercialisation of its back pain treatment. The Novartis partnership is worth $50 million initially and would see Novartis partner with Mesoblast in the development of its flagship product for use against respiratory distress, including COVID-19 illness.

Bell Potter said recent phase 3 trial results for Mesoblast’s back pain treatment was a positive for the future of the Grunenthal deal, “however the timing of cash inflow from this deal has moved to the second half of the 2021 calendar year,” Ms Jain noted.

On Friday, Mesoblast said the Novartis deal had not yet been formally closed. “The agreement remains subject to certain closing conditions, including time to analyse the results from the COVID-19 [respiratory illness] trial. The group is further assessing the ongoing accounting impact of this agreement,” the company said.

Last year, Mesoblast shares were hammered on news that its COVID-19 treatment trial would be wrapping up early after advice it was unlikely to meet its primary goal.

Mesoblast’s most recent major capital raising was last May, when the firm banked $138 million from investors to commercialise the COVID treatment.

The company told investors in its half-year report it was also still fighting the US Food and Drug Administration for approval of its flagship product, Ryoncil, for use in paediatric bone marrow transplant patients.

The US regulator paused approvals at the final hurdle last year, asking Mesoblast for more data on the treatment. The company has since met with the regulator to ask for accelerated approvals, but “current FDA review team have not agreed to accelerated or full approval”, Mesoblast said.

It will meet a different FDA team in the near future to discuss approvals further, it said.

Mesoblast chief executive Silviu Itescu declined to comment while the company remains in a trading halt.

A concise wrap of the day on the markets, breaking business news and expert opinion delivered to your inbox each afternoon. Sign up here.