Credit Suisse Group opted to tap investors for a painful multibillion-dollar capital raise to shore up confidence and fund a years-long reshaping that will carve out its investment bank and slash its headcount by 9,000.

The stock closed 18.6 per cent lower on the firm’s plans to raise 4 billion francs ($6.2 billion) through a rights issue and selling shares to investors including the Saudi National Bank. It’s effectively breaking up the investment bank, separating the advisory and capital markets unit and selling the majority of a trading business to a group led by Apollo Global Management. 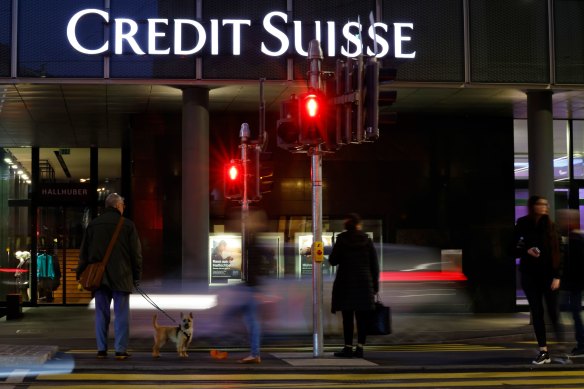 Credit Suisse is cutting its workforce by 17 per cent over the next three years.Credit:Bloomberg

The moves mark an urgent attempt to restore credibility at Credit Suisse after a succession of big losses and management chaos shattered its status as one of Europe’s most prestigious lenders. Chief executive officer Ulrich Koerner and Chairman Axel Lehmann are already facing questions over whether the biggest overhaul in the bank’s recent history is radical enough and offers sufficient payoff for suffering shareholders.

“The new Credit Suisse will definitely be profitable from 2024 onwards,” Koerner said in an interview with Bloomberg Television’s Francine Lacqua. “We do not want to overpromise and underdeliver, we want to do it the other way around.”

The shares plunged in Zurich as investors digested combined charges related to the restructuring of about $US6.6 billion and the dilution effect of the share sales. The capital raise may install Saudi National Bank, backed by the nation’s key sovereign wealth fund, as one of Credit Suisse’s top shareholders, with a stake of as much as 9.9 per cent.

Bank executives had wanted to avoid a capital increase given the shares were trading near record lows, but saw outflows of assets and deposits from wealthy clients and ultimately decided to boost capital to help shore up its finances. The bank posted a third-quarter net loss of 4.03 billion francs and said it expected a fourth-quarter loss as well.

“Credit Suisse seems to be wanting to put a line under concerns by wealth management clients,” JPMorgan Chase & Co. analyst Kian Abouhossein wrote in a note to clients Thursday. “Material questions remain to assess well the outcome of the IB restructuring, which is relatively more complicated to what we witnessed in the case of UBS and Deutsche Bank.”

The firm will start headcount reductions of 2,700 positions in the fourth quarter and said that its workforce is set to decline by about 9,000 to 43,000 by 2025. Its also seeking to reduce the cost base by 15 per cent, or 2.5 billion francs, by that date.

Credit Suisse is aiming for a 6 per cent return on tangible equity in 2025, a target that analysts at Citigroup said “appears to lack ambition.”

Some of the biggest changes will come at the investment bank, including the departure of its head, Christian Meissner and the revival of the First Boston branding. The separate business will include the bank’s historically strong advisory and leveraged finance unit and be led by Michael Klein, a veteran ex-Citigroup dealmaker known for his ties with the Middle East. 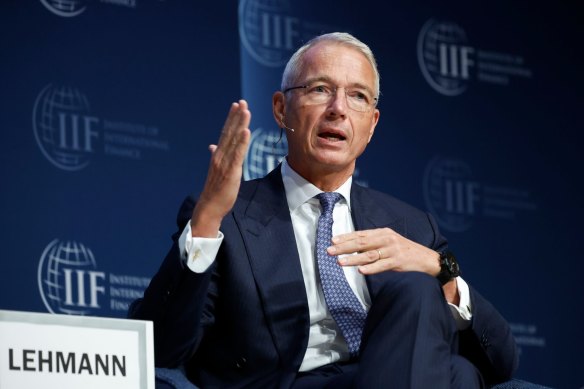 Chairman Axel Lehmann is already facing questions over whether the biggest overhaul in the bank’s recent history is radical enough and offers sufficient payoff for suffering shareholders.Credit:Bloomberg

The bank has already lined up an outside investor willing to make a $US500 million injection into the business, Koerner said without identifying the investor. The new firm will be a partnership model, with key employees having a level of ownership, and could pursue an initial public offering in the future.

The bank’s overarching aim at the investment bank is to reduce risk weighted assets. It’s placing European lending and capital markets activities into the “capital release unit” it’s created to host assets it plans to wind down. And it said it reached the framework of a deal to sell the majority of its securitised products group’s assets to vehicles managed by Apollo and Pacific Investment Management Co.

The restructuring comes as third-quarter results shone a light on the challenges ahead. The investment bank continued to struggle and wealthy clients fled. The bank posted a more than $US4 billion quarterly loss, including a 3.7 billion-franc ($5.8 billion) impairment of deferred tax assets related to the revamp. The restructuring will cost an additional 2.9 billion francs through 2024.

To help pay for the overhaul, Credit Suisse said it will only pay a “nominal” dividend over the next couple of years, before reverting to “meaningful” payments from 2025 onwards. The stock is down more than 50 per cent this year and trades at the biggest discount to its book value among major European banks.

Koerner’s overhaul is the culmination of a three-month strategic review, prompted by a larger-than-expected 1.59 billion-franc loss in the second quarter that spelled the end of the short-lived tenure of CEO Thomas Gottstein. The former investment banker — tapped in 2020 after Tidjane Thiam left because of a spying scandal — presided over financial and reputational hits from the collapses of Archegos Capital Management and Greensill Capital, while overseeing a whirlwind of changes across the management board.

Less than a year ago, Antonio Horta-Osorio, who had successfully turned around Britain’s Lloyds Banking Group, made his own attempt to try and turn around the bank’s fortunes. The then-chairman decided to exit the hedge fund business at the centre of the Archegos scandal and shift about $US3 billion of capital from the investment bank to the private bank. That stopped short of the more dramatic changes that some analysts and investors had imagined.