As temperatures recently reached triple digits, farmer Joe Del Bosque inspected the almonds in his parched orchard in California’s agriculture-rich San Joaquin Valley, where a deepening drought threatens one of the state's most profitable crops.

Del Bosque doesn’t have enough water to properly irrigate his almond orchards, so he’s practicing "deficit irrigation" — providing less water than the trees need. He left a third of his farmland unplanted to save water for the nuts. And he may pull out 100 of his 600 acres of almond trees after the late summer harvest — years earlier than planned.

"We may have to sacrifice one of them at the end of the year if we feel that we don’t have enough water next year," said Del Bosque, who also grows melons, cherries and asparagus. "That means that our huge investment that we put in these trees is gone." 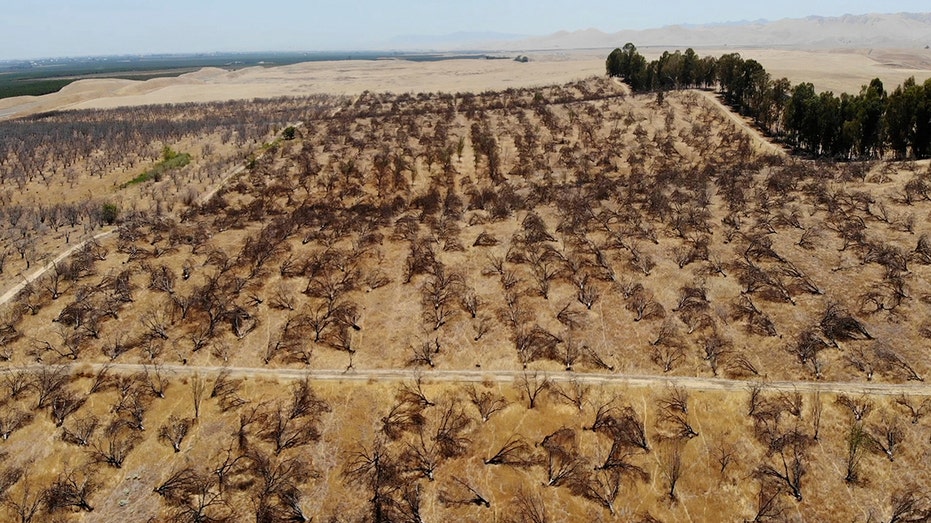 In this aerial photo is an abandoned almond orchard in Newman, Calif., on July 20, 2021. California’s deepening drought threatens its $6 billion almond industry, which produces about 80 percent of the world’s almonds. As water becomes scarce and expe (AP Photo/Terry Chea / AP Newsroom)

A historic drought across the U.S. West is taking a heavy toll on California’s $6 billion almond industry, which produces roughly 80% of the world’s almonds. More growers are expected to abandon their orchards as water becomes scarce and expensive.

It’s a sharp reversal for the almond’s relentless expansion in California’s agricultural Central Valley, whose dry Mediterranean-like climate and reliable irrigation system made it the perfect location to grow the increasingly popular nut.

Almond orchards are thirsty permanent crops that need water year-round, clashing with a worsening drought and intensifying heat waves tied to climate change. Scientists say climate change has made the American West much warmer and drier in the past 30 years and will keep making weather more extreme. 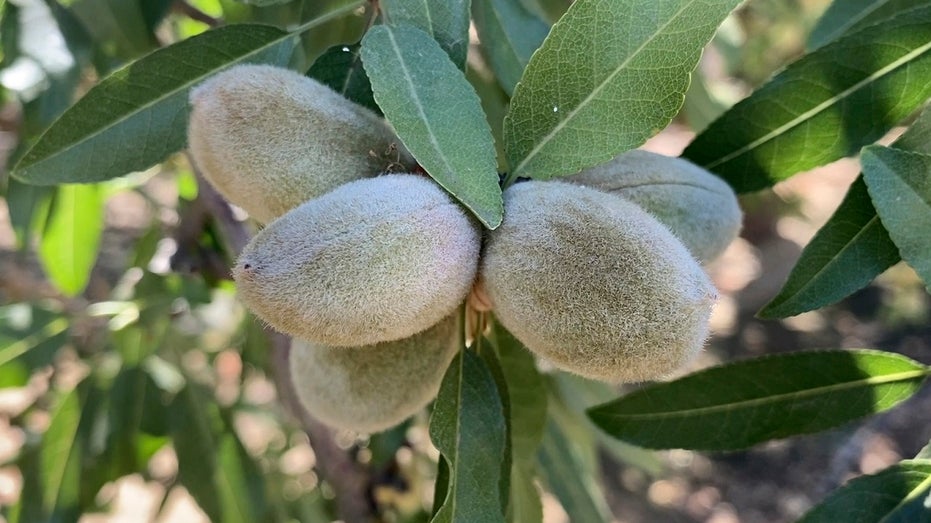 Almonds, still in their green hulls, hang on a tree at an orchard owned by farmer Joe Del Bosque in Firebaugh, Calif., on July 9, 2021. (AP Photo/Terry Chea)

In May, the USDA projected that California's almond crop would hit a record 3.2 billion pounds this year, but in July, it scaled back that estimate to 2.8 billion pounds, citing low water availability and record heat.

"A lot of growers are having to go through a stressful time to make the water they have last to keep their trees alive," said Richard Waycott, president and CEO of the Almond Board of California, which represents more than 7,600 growers and processors.

Almonds are California’s top agricultural export. The industry ships about 70% of its almonds overseas, fueled by strong demand in India, East Asia and Europe, according to the board.

As almond prices rose during a previous drought that California declared from 2012 to 2016, farmers and investors planted hundreds of square miles of new orchards in areas that lack reliable water supplies.

The almond boom has run into the second major drought that California has declared in a decade. The U.S. Drought Monitor reported that 88% of the state was in "extreme drought" as of last week, with the Central Valley facing the worst conditions.

The drought has drained reservoirs that supply water to Central Valley farms. In early August, Shasta Lake, the state’s largest, was only 30% full, while Lake Oroville, the second largest, was only 24% full, according to the California Department of Water Resources.

State and federal officials have reduced water for agriculture, forcing many farmers to leave fields fallow or switch to higher-value crops that use less water. 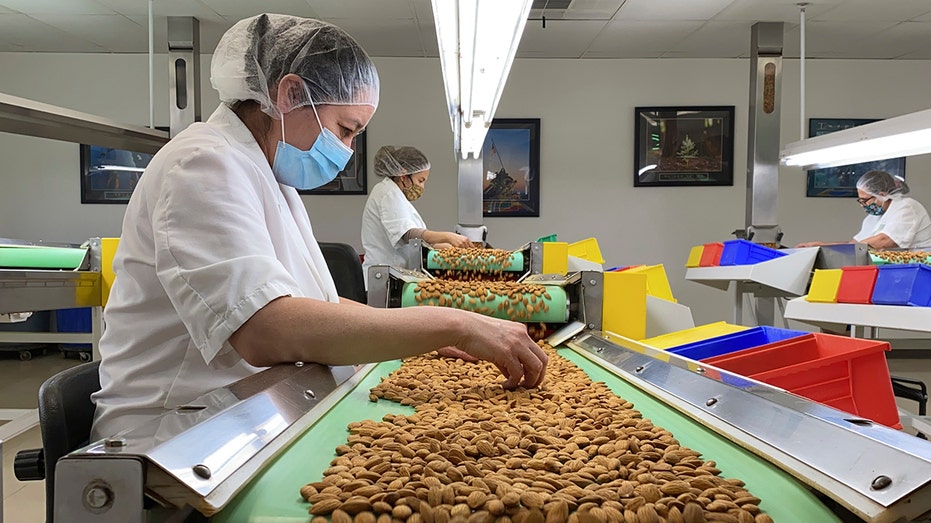 Inside the processing facility of Stewart & Jasper Orchards, about a dozen women wearing hair nets and masks inspected almonds by hand as a river of nuts traveled over conveyer belts before they were packed into boxes and shipped to customers around the world.

"The profitability of growing almonds is not the same as it was in the past," said owner Jim Jasper, whose father co-founded the company in 1948. "The world is going to start to see less almonds."

Jasper estimates that about a third of California’s orchards are planted in areas with unreliable water supplies, and many of them won’t survive the drought. Some of his neighbors have stopped irrigating their orchards, and they’re letting the trees die. 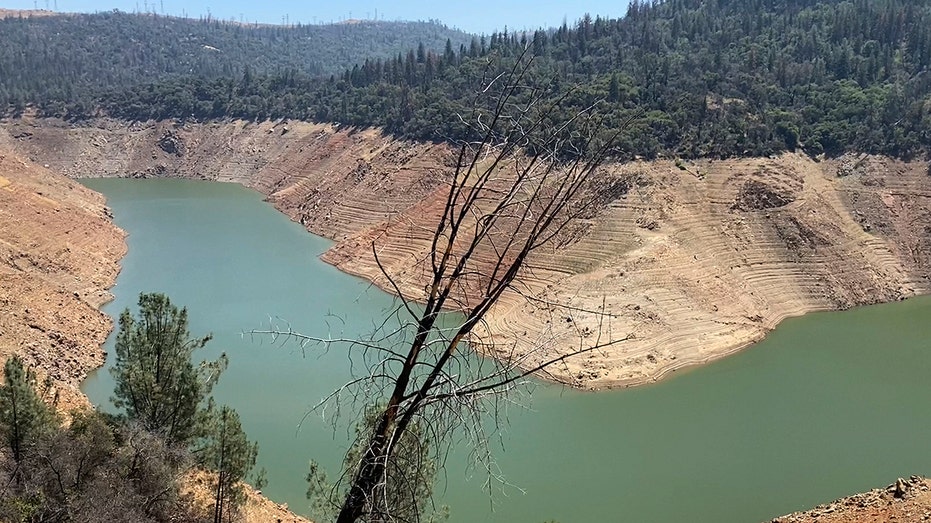 "As you can see, there’s one orchard here that’s drying up because they just didn’t have the money to buy the water. And we’re seeing this all over the valley," Jasper said.

As the drought drains reservoirs and Gov. Gavin Newsom calls on residents to voluntarily reduce water use by 15%, critics say the thirsty crop isn’t sustainable at current levels in California.

"If we’re conserving in the cities so that they can grow more almonds, it’s simply not fair because it’s not benefiting the majority of Californians," said Tom Stokely, a board member for the California Water Impact Network, a nonprofit group that advocates for sustainable water use.

Stokely believes the state should ban permanent crops like almond orchards in areas that don’t have adequate water supplies.

"With the climate change, the drought, the heat waves we’re having, something’s going to change very quickly or we’re going to literally see our state collapse," Stokely said. "We need to do something about it."