The buy now, pay later sector has capped off a horror day, with troubled group Zip scrapping its merger with Sezzle, while the Commonwealth Bank saw the valuation of its investment in Swedish group Klarna tumble by $2 billion.

In a statement on Tuesday, Zip said will pay $US11 million ($16 million) to walk away from the deal to buy out Sezzle in a transaction that was once valued at $491 million. The dismantling of the merger came after a change in economic conditions, increasing bad debts and a poor outlook for the sector eroded the value of the deal. 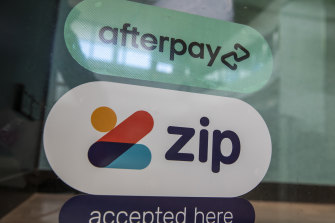 The valuations of Afterpay and Zip have tumbled, and some observers say the outlook remains bleak for the buy now, pay later sector.Credit:Louie Douvis

It’s another blow for the sector that has fallen out of favour with investors in the past year as bad debt rates continue to blow out and amid the looming spectre of regulatory intervention on buy now, pay later products, which are not currently classified as credit products in Australia.

Overnight, one of the world’s biggest buy now, pay later groups, Klarna, saw its valuation slashed by 85 per cent to less than $US7 billion ($10.3 billion) in a capital raising. The raising effectively reduced a stake held by the Commonwealth Bank that was once worth more than $2.6 billion to less than $500 million. Klarna had once been valued at $US46 billion.

Also on Tuesday, Assistant Treasurer Stephen Jones reaffirmed in a speech to a Sydney conference that he would seek to classify buy now, pay later transactions under the credit code. Jones said shortly after the Albanese government was elected that he would look to introduce formal regulation for the products.

Zip and Sezzle’s merger was pitched to investors as a way to combine the customer and merchant bases of both groups to create a much larger player that could compete more easily with Afterpay, Klarna and US market leader Affirm. Those groups are also facing increased competition in the buy now, pay later space from groups such as Apple and PayPal.

Cash-strapped Zip raised $172.8 million from institutional and retail shareholders earlier this year as part of the transaction.

Zip chairman Diane Smith-Gander pointed to the change in economic conditions since the deal was announced in February.

“We believe that mutually terminating the merger agreement with Sezzle at this time is in the best interests of Zip and its shareholders, and will allow Zip to focus on its strategy and core business in the current environment,” she said.

Zip said on Tuesday that it remained focused on its strategic plan, and was moving towards profitability.

“Zip is well capitalised to execute on its strategy and in line with previous guidance, Zip continues to expect to deliver group profitability during full-year 2024,” the company said.

Sezzle chief executive Charlie Youakim said his group was also dedicated to moving toward profitability and free cash flow as it was the best outcome for shareholders.

“While we were excited by the potential of this transaction, our board and management team are laser-focused on our strategy and execution,” Youakim said.

Sweden-headquartered Klarna was also sounding positive about the future having raised $US800 million, albeit at a much lower price than in previous raisings.

“It’s a testament to the strength of Klarna’s business that, during the steepest drop in global stock markets in over fifty years, investors recognised our strong position and continued progress in revolutionising the retail banking industry,” Klarna chief Sebastian Siemiatkowski said.

A Commonwealth Bank spokesman confirmed the bank had participated in the capital raising by Klarna overnight to maintain its stake.

“Since our initial investment in 2019, Klarna has almost trebled its global revenue, customer base and transaction volumes and now generates $US1 billion in gross profit from its established European markets,” the spokesman said.

“We also remain firmly committed to our partnership in Australia and New Zealand,” he added.

“The change in Klarna’s valuation will be reflected in CBA’s end-of-year accounts, and will have no impact on the bank’s income, profit or capital position.”