Aussie Home Loans founder John Symond has backed a Coalition plan to let people use their superannuation to get into the property market, playing down concerns the policy would simply push house prices even higher.

As the big banks largely steered clear of the political debate over the government’s proposed changes on Monday, mortgage brokers said the policy would make it easier for some first home buyers to overcome a key hurdle: saving a deposit. 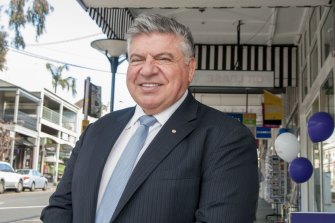 Symond, who sold Aussie last decade before the company merged with Lendi last year, said he had been disappointed with other policy offerings for first home buyers, but backed the government plan because it would allow people to invest their super.

“They’re not getting it and just going out and buying televisions and going on holidays. They’re investing it,” Symond said.

In response to criticism the policy would inflate house prices, Symond said people would be more cautious about bidding up prices when they were using their own savings, as opposed to government grants.

“The difference here is people will think very carefully on this because it’s their money. They’re not spending government’s money, it’s not a loan, and they still retain 100 per cent ownership,” he said.

As super funds warned the scheme would damage retirement savings, Symond argued the policy was safe because house prices were likely to rise over time, and buyers were required return the money to their super fund once the house was sold.

Symond was critical of key Labor policies at the last election and he has previously hosted Liberal fundraiser dinners. He said he had offered the same events to Labor, and the party had not taken up the offers, and that he was not a member of a political party.

His comments came as others in the mortgage broking sector said the Coalition’s proposed policy to allow people to use up to $50,000 in super for deposit would help first home buyers save a housing deposit, but it would not help to address housing supply.

Anthony Waldron, interim chief executive of REA Group’s Mortgage Choice, said the policy would allow some first home buyers to enter the market faster, but it could also push prices higher. “It won’t do much to help address housing affordability in the short term because it doesn’t address the issue of supply. So, it’s likely that there will be an increase in demand [which] will push up prices.”

Meanwhile, chief executive of the Mortgage and Finance Association of Australia Mike Felton said the policy would deal with the challenge of saving up a deposit, while giving people flexibility in how they used their super.

When asked how it would affect bank lending, he said the key issue for banks would be whether customers could afford the loan. “I think the main one is: does the income stack up, and can they afford the loan?”

Banks were reluctant to discuss the policy on Monday, with Commonwealth Bank, Westpac, ANZ Bank and the Australian Banking Association declining to comment.

National Australia Bank group executive for personal banking Rachel Slade said: “We welcome the announcement from the Coalition that would provide further support to Australians to buy their own homes. If re-elected we would look forward to working with the government on the details.”

Founder of mortgage broker Homeloanexperts.com.au Otto Dargan said home buyers in their 30s were likely to benefit from the policy more than those in their 20s, who had not generally had the time to build up a substantial super balance.

Dargan backed the policy overall, saying that saving a deposit was the main challenge for most home buyers. But he said a key blind spot was that it did not address housing supply, and another question was what would happen if the buyer sold their property due to financial distress.

“If the super fund is receiving part of the equity, what happens if the person has to sell that property in hardship?” Dargan said.

Commonwealth Bank head of Australian economics Gareth Aird said that with interest rates rising and house prices tipped to fall, he did not expect the policy would have a major short-term impact on the property market.

“I suspect a policy like that is going to have more of an impact in a rising market than a falling market,” Aird said.