The competition tsar has called on major banks to update their processes to stop customers from transferring money to fraudsters, after an industry body accused the sector of ‘victim blaming’ to avoid responsibility for scam losses.

Australian banks do not block transactions where the name listed by the sender does not match the account details of the recipient. Australian Competition and Consumer Commission (ACCC) chair Rod Sims said Australians were losing $2 billion a year to scams, which is “rapidly rising”. 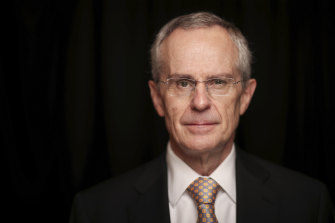 “We do think this is an important issue confirming who the payee is,” Mr Sims said. “Some banks say there are other things coming along which will fix the problem. I’d be asking the banks, if you have an alternative, how far away is it?”

The UK payments regulator introduced new rules last year that force banks to name-check transactions and issue notifications if there is a mismatch. Australian Institute of Conveyancers national secretary Dion Dosualdo said this was designed to reduce fraud, and the Australian banking sector’s refusal to implement a similar system meant it was complicit.

“The fact there is no dual verification there means the banks can wash their hands of the situation,” Mr Dosualdo said. “This is what the scammers are cashing in on.”

The ACCC sent a letter to the Australian Securities Investments Commission (ASIC) in February last year to encourage it to “consider how similar initiatives” to the UK’s might work in Australia. In May this year, ASIC released a consultation paper saying the merits of the UK’s system required additional industry consultation and input from government.

The major banks offer a system called PayID, where customers can transfer money using a mobile number or email address instead of BSB and account numbers. This system notifies senders if there is an ID mismatch but is only available when transferring smaller sums and accessible through internet banking.

The Australian Banking Association (ABA) said it was studying the UK model closely, but noted the UK had seen a “significant increase” in scams despite the new systems. “Australia’s banks are looking to implement better and more effective solutions,” a spokesman said.

The Age and Herald reported this week that NAB failed to block transactions worth almost $100,000 made by 32-year-old Sanjay Joseph to a fraudster who had infiltrated his conveyancer’s systems.

Mr Dosualdo said there has been a rise in fraudsters hacking email systems of conveyancers during the pandemic to take advantage of increased activity during the property boom. “It is being targeted,” he said. “You see large sums of money required to be transferred in bulk sums. It’s very lucrative.”

The ABA is running a campaign to raise awareness about cyber scams, encouraging consumers to remain vigilant to “avoid being stung by a scammer”.

Mr Dosualdo described the campaign as an “exercise in victim blaming” designed to reduce the liability of the banking sector to intervene, prevent scams or compensate for losses. “In years gone by a bank robber would hold up the teller, now they are waiting outside and target the client instead,” he said. “The banks sit idly by and let it happen.”

Major banks are pouring significant resources into fraud detection and prevention, although many insiders working in these teams claim resources are stretched amid a scam boom during COVID-19.

Mr Sims said it was the banks’ ageing technology systems that created delays in implementing new systems, rather than an effort to reduce liability. “The banks have a lot of legacy systems in their IT,” he said. “We’re finding this with consumer data right, any changes take a lot of time and effort.”