Humm founder Andrew Abercrombie will once again become the consumer lender’s chairman and former bank CEO Stuart Grimshaw will join the board after the collapse of a deal to sell its buy now, pay later arm saw all other directors resign.

Abercrombie, who was Humm’s chairman until last December, will again steer the company’s board after a tumultuous few months, which culminated in the collapse of a deal to sell its consumer finance arm to Ahmed Fahour’s Latitude Financial. 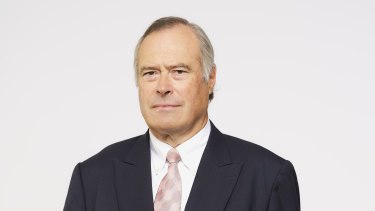 Humm founder Andrew Abercrombie will once again become chair of the company.

Abercrombie, who is also the biggest shareholder in Humm with a 23 per cent stake, had openly campaigned against the sale, arguing it undervalued the consumer business and urging shareholders to vote against it.

The other directors told shareholders several weeks ago that Humm and Latitude had mutually agreed to abandon the deal due to major market disruption. The board later said the fall in Latitude’s share price had sunk the value of the deal.

After the deal collapsed, the other directors said they could not remain on the board with Abercrombie, and resigned.

In an update to the ASX on Thursday morning, Humm announced that Abercrombie would become the chair after the resignation of Christine Christian. Abercrombie was a founding shareholder of the original FlexiRent business two decades ago, and stepped down as chair last December when Christian took over. Rajeev Dhawan and Carole Campbell also officially retired from the Humm board on Wednesday, following John Wylie and Alistair Muir, who resigned last week.

On Thursday, Humm also announced the appointment of Grimshaw, the former chief executive of the Bank of Queensland, to the board.

Grimshaw was the bank’s chief executive from 2012 to 2014, then chaired Texan pawn shop operator EZCorp. He is currently a director of Bionic Vision Technologies, Millennium Services Group, Jungle Capital and BidFin.

Terry Fleming, the chair of Humm’s Irish business, will become a non-executive director. Humm said on Thursday it was continuing its search for experienced directors to join the board.

Meanwhile, analysts say there is still the possibility of a tie-up between the Latitude and Humm.

“There’s a more than 50 per cent chance that Latitude could come back at some point of time in the future, depending on how the share price progresses. I do not think that they will just ditch this and then walk away.”