The evidence is overwhelming for Sven Henrich: we are in a stock-market bubble.

Henrich, the founder of NorthmanTrader, just has too look at any number of indicators to arrive at that conclusion.

Market cap-to-GDP, a valuation indicator that Warren Buffett popularized, is at all-time-highs, way above levels seen during the dot-come bubble. 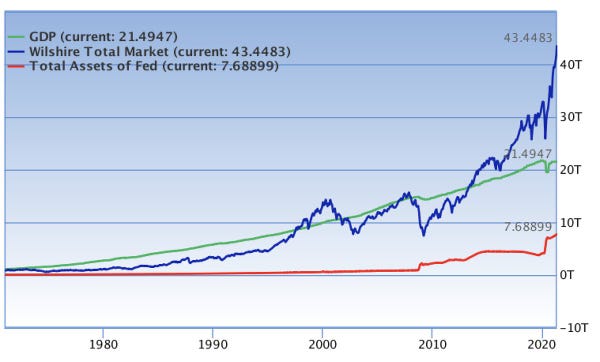 More than 95% of S&P 500 stocks are above their 200-day moving averages — a sign that regardless of the market’s day-to-day noise and temporary setbacks, these stocks are in solid uptrends. 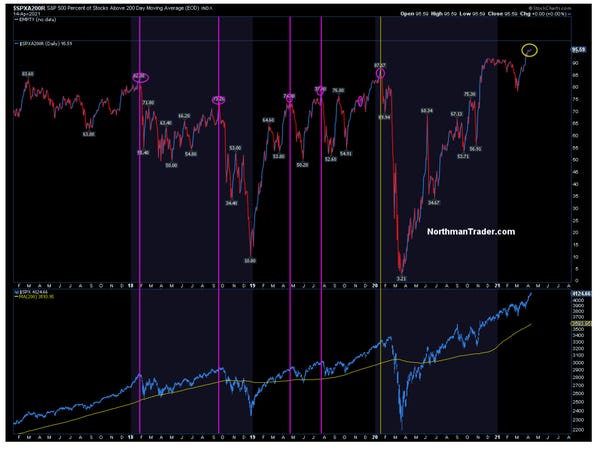 In another sign of outperformance, the S&P 500 is grossly disconnected from moving averages and has broken its upper quarterly Bollinger bands.

And yet, some of the fundamentals are not yet as impressive. Around 40% of companies in the Russell 3000 had a negative net income as of year-end 2020. 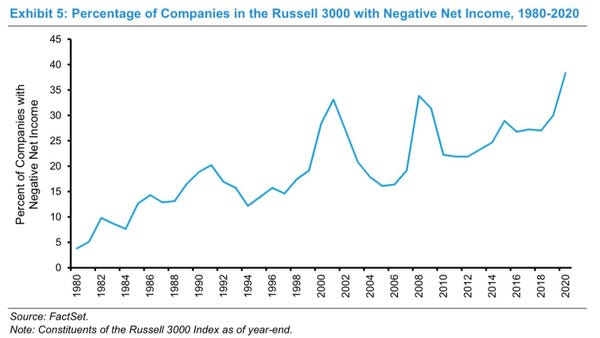 “I could list many examples, but you get my drift,” Henrich, said in a recent post. “People are engaging in investing behavior that would be severely punished in any other time in history but because they aren’t the belief becomes self fulfilling.”

Of course that’s thanks to the Federal Reserve, Henrich says. The cash they’re flooding the market with — and the constant reassurance that they will keep doing so — has made everyone a winner over the last year, and has created a belief among investors that they can’t lose, therefore encouraging them to further bid up asset prices.

But the party can’t go on forever, he warns. While it’s difficult to know exactly when the bubble might burst, it eventually will.

Henrich also argued that the case for the Fed to keep supporting markets isn’t there anymore, with vaccinations increasing and robust fiscal stimulus having been distributed. He pointed to firms like Bank of America feeling financially secure enough to buy back large chunks of their own shares.

Investors have been alarmingly bullish over the last 12 months and especially since November. April has also been a strong month so far, with the S&P 500 up around 5% and continually hitting new highs.

This has made experts’ views on Wall Street more cautious. Bank of America warned last week that investors should be careful of overextension in areas like valuation, sentiment, risk-appetite, return outperformance historically, and fair value. Their S&P 500 price target for the end of 2021 is about 9% lower than current levels. 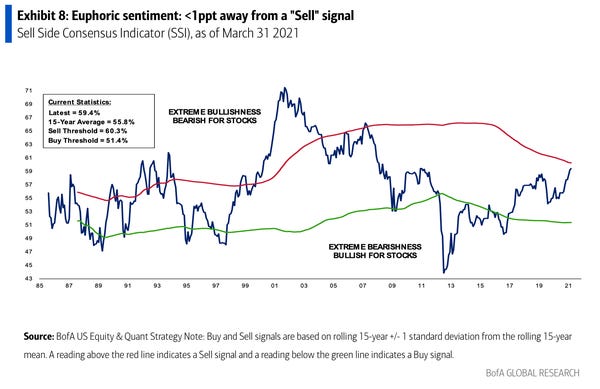 “Amid increasingly euphoric sentiment, lofty valuations, and peak stimulus, we continue to believe the market has overly priced in the good news,” Savita Subramanian, the bank’s top US equity strategist, wrote in an April 14 note. “We remain bullish the economy but not the S&P 500.”

Societe Generale Strategist Albert Edwards, who, to be fair, tends to generally be more bearish, is also warning that a plethora of indicators show overextension.

And while others may not be calling for a significant sell-off, mainstream views on how much further the S&P 500 can run this year are fairly muted.

Stocks sit in a difficult spot for investors. Spending is about to pick up as the economy reopens and consumers dig into their full pockets, yet this already seems to be reflected in index prices.

But from a broader market perspective, are there gains still to be had? Stocks seem invincible, they’ve made bears look silly, and they may continue to do so.

Yet investors also seemed eager to lock in gains on Thursday, with the S&P 500 falling 1.25% over the course of an hour on news that President Biden plans to raise capital gains taxes on those who earn more than $1 million a year.

In a market where investors have justified high valuations using low interest rates — and where 10-year Treasury yields rising above 1.5% spooked investors and triggered meaningful sell-offs in some major growth stocks — what will happen at the first suggestion from the Fed that monetary policy will start to tighten?

Time will tell where stocks go from here, but they are certainly in a more precarious position than they were six months ago.