When the global pandemic upended how society approaches work,  some individuals were able to sit back and evaluate what matters most to them and how they would approach their future careers.

For Anand Venkateswaran, also known as Twobadour, he decided to take a leap of faith into the world of crypto.

Over the course of a year, Venkateswaran went from fintech journalist to becoming a digital art maven that oversees the world’s largest non-fungible token fund, Metapurse.

Why did he make the shift? “I guess one fine day I decided to get paid for work,” Venkateswaran said, jokingly.

Journey from journalism to crypto

Venkateswaran met fellow Metapurse co-founder Vignesh Sundaresan (Metakovan) back in 2013 in his capacity as journalist.

The two kept in touch and by 2017, Sundaresan had a number of crypto enterprises under his belt, while Venkateswaran was just starting to dip his toes into the world of crypto by writing about decentralized finance.

When the pandemic hit, Venkateswaran was ready to get some skin in the game.

“I spent my entire life looking at art from a distance, not understanding much, or not trying to understand much,” Venkateswaran said. “… but then the catalyst in me trying to engage with art happened because of the NFT space.”

An NFT is a cryptographic token that exists on the blockchain and can represent items, such as art, music and real estate. Each token represents a unique digital item and can’t be exchanged for another, the way a cryptocurrency can.

“[2020] that’s when it started to come together, Metakovan’s thesis about NFTs and mine converged at some point, we both started to believe that NFTs are going to be the primary driver for crypto as a whole,” Venkateswaran said.

Together the pair launched Metapurse in September, 2020, a private fund that manages a collection of non-fungible tokens from digital art to virtual real estate. The portfolio is already estimated to be worth around $189 million, according to nonfungible.com.

It’s an organic creature, Venkateswaran said. It started as Sundaresan’s personal collection and is now forming into a fund that makes impact investments in the NFT space.

In March, the two hit the headlines when they purchased digital artist Beeple’s “Everydays: the first 5000 days” NFT for $69 million from the iconic Christie’s auction house. 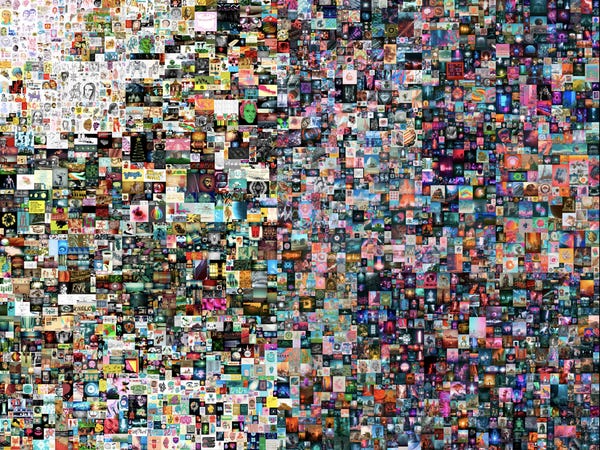 The sale was a defining moment for the industry catapulting NFTs into the mainstream, since then corporate companies and big-name celebrities have jumped into the trend.

Beeple’s artwork became the “crown jewel” of the portfolio, but it also contains other prominent pieces, such as Formula One’s DeltaTime 1-1-1 piece and “First Supper”.

“In a span of eight to nine months, I had forged very interesting, intense and personal relationships with close to 100 artists,” Venkateswaran said. “And that completely upended this notion that I had in my head that artists are another species, that they are hard to reach, that art itself is something abstract and out of my reach.”

“The NFT space, in general, forces you to come out of your comfort zone and engage with the actual artists, with the actual work,” Venkateswaran said. “So there is no shortcut to it, you need to scroll endlessly, you need to try and find out what speaks to you, and then discover a little more about the artists and then see if you can buy it.”

With so many NFT drops happening, even Venkateswaran has missed out on important pieces of work because so much is going on.

Venkateswaran describes the current NFT market as “extremely chaotic”, which can make it difficult for new investors to get into the space and make decisions.

“That sense of FOMO that you have is hard to shake off even for me,” Venkateswaran said. “I found it hard to shake off my FOMO, eight months ago, when I mean relatively speaking, hardly anything was happening.”

Venkateswaran shares how he approaches investing for the fund.

“I go shopping with the artists,” Venkateswaran said. “So I fix up the time with them and we share a screen on zoom, and they take me through the artists and the art that they love the most and that becomes part of the Metapurse collection as well.”

He looks for the following four qualities when investing:

1) Narratives that will stand the test of time

The timeframe is at least 10 years, which is a long time in the crypto world.

One example is Venkateswaran is cautious about investing in NFT marketplaces, because there are already so many of them. He wants to invest in platforms that have taken the conversation forward significantly and changed it for the better and will continue to do so.

“It is only when [artists] are confident enough in this space, and their work in this space, that they’re prepared to drop all of those familiar tropes and present something authentic in purity, which is when the magic happens, that’s what I look for,” Venkateswaran said. “I look for a lot of ‘anti-patterns’ when it comes to art.”

The fund also invests in infrastructure and platforms that will help the NFT landscape flourish. These platforms need to have strong business models and willingness to engage in NFT culture, Venkateswaran said.

Where’s all the money coming from?

Sundaresan provided the initial funds for the portfolio and is estimated to be spending around $250,000 a week on NFTs, according to a April 14 podcast interview with Sundaresan.

“When we spend that amount of money, it’s not on one single NFT, or one single project, it is still diversified within this ecosystem,” Venkateswaran said. “And we see no dissonance in spending that kind of money on an idea you believe in and if the space grows, you tend to grow with it.”

Sundaresan invested in Ethereum early on and has been in the space since the early years, which was a very important inflection point in wealth building, Venkateswaran said. He also doesn’t own a house, or a car and over 99% of his assets are in crypto, he added.

“He has a very strong thesis on how to build wealth in the crypto space,” Venkateswaran said. “For instance, one of them being ‘maximalism is lazy’. If you sit and hold just one currency, or one token, for a really long time, sure, you might even go 1,000x over a period of time. But if you’re able to put yourself out there more often and to try and identify these diamonds in the rough, try and look ahead of the curve, you’re able to build wealth.

“That’s how he did it,  I’m not saying it’s easy, far from it, but that’s the source of his wealth.”