Dan Murphy’s operator Endeavour Group is keen for Christmas – the retailer has even been offering on-the-spot interviews for seasonal workers this year to ensure stores are well staffed as the rush begins.

Boss Steve Donohue is also upbeat about the festive season, hoping that the business will see the best Christmas it’s ever had as consumers continue to spend up on beverages despite cost of living pressures biting.

It’s been less than 18 months since Woolworths spun out its liquor and gaming business and Endeavour came to stand on its own two feet on the ASX. During that time, there have been temporary closures of pubs, a boom in online retail and, more recently, an increased concern about consumer spending.

With so many economic uncertainties on the horizon, is the business on a growth path?

How it started: Daniel Francis Murphy opened his first liquor store in 1952 and then launched Australia’s first wine club. Murphy sold the business to Woolworths in 1998. Two years later, the company formed its Woolworths Liquor division which included its BWS-branded bottle shops. In 2016, the division was renamed Endeavour Drinks.

Main products: Alcoholic and non-alcoholic beverages, and a national network of hotels.

The bull case: The past two years haven’t been typical trading conditions for Endeavour – lockdowns led to a huge spike in online sales across Dan Murphy’s and BWS, while hospitality restrictions shuttered the company’s pubs business for decent chunks of 2021.

The most optimistic stock watchers are looking through all that noise to the longer-term strength of the business. Endeavour has a strong base of repeat customers across its brands, and analysts are hopeful that the company’s increased investment in its digital capabilities will help leverage this.

The company’s shares fell more than 12 per cent in the days after it posted an 11.2 per cent jump in net profit for 2022, with the numbers slightly below market consensus.

Goldman Sachs analysts called that sell-off an overreaction, noting that the company’s hotels business has bounced back from lockdowns in a much stronger position than expected. 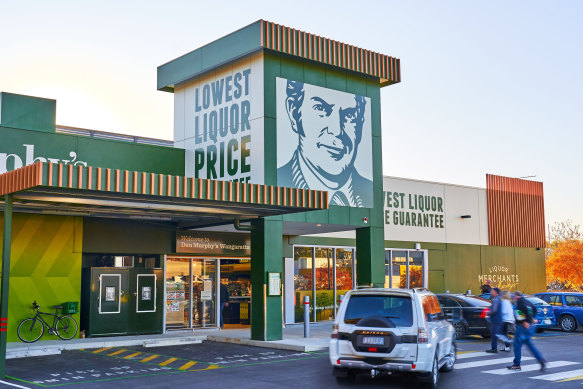 Dan Murphy’s was a regular haunt for Australians during the pandemic lockdowns.Credit:Domain

“As the company continues to invest in consumer loyalty and digitalisation, we expect that this will continue to drive mid-single digit sales growth in mix improvement together with cost efficiencies for margin expansion,” Goldman Sachs’ Lisa Deng said.

Macquarie’s team agrees the business will be resilient during market downturns.

“As a staple service and product provider with significant organic reinvestment opportunity we believe it is an attractive asset,” analysts said after the company’s full-year results.

The bear case: More cautious stock watchers are concerned about rising costs across the retail business, at a time when there is increasing competition for customers’ cash.

Drink purchases spiked throughout lockdowns, but they are starting to moderate and Endeavour saw sales drift back towards normal levels during the first weeks of the 2023 financial year.

Morningstar says the shares would be fair value at $6.20, and reflected after the company’s annual results that the stock appears overvalued at current prices.

“Costs as a percentage of sales increased because of negative operating leverage from weakening sales, greater expenses for technological capabilities, and temporarily higher costs because of COVID-19-related absenteeism and severe weather events,” analyst Johannes Faul wrote in a note to clients.

UBS analysts also have a ‘sell’ rating on the stock with a target price of $7.10. Analyst Shaun Cousins and his team noted those higher costs of doing business could weigh on next year’s result.

“Tech operating expenses are forecast to increase by $20 to 30 million, with cost savings unlikely in fiscal 2023, while wage inflation…is another headwind,” he said in a note to clients.