Prospective first home buyers’ relief in seeing property prices fall could be short-lived as higher interest rates reduce the amount they can borrow and the gap between what they can afford and house prices widens.

Following last week’s rate jump, and assuming the couple borrow at the new average variable mortgage rate of 3.23 per cent, the couple’s borrowing capacity has effectively been reduced by 2.6 per cent, or more than $33,000 – significantly more than any price falls recorded in Sydney or Melbourne so far. 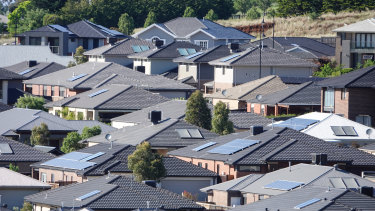 Falling house prices may not be the blessing for first-time buyers it seems, with higher interest rates reducing their borrowing capacity.Credit:Paul Rovere

If the cash rate climbs 2 per cent, which some economists are forecasting to be the top of the current tightening cycle, the couple’s borrowing capacity would reduce by almost 18 per cent to $1,066,000. That exceeds the forecasts of some property watchers for falls of up to 15 per cent for dwelling prices over the next 18 months, making them worse-off than before any price falls.

Canstar modelling shows that property prices would need to fall at least 20 per cent before first home buyers would start to get ahead, because of their borrowing capacity reduction.

Steve Mickenbecker, group executive of financial services at Canstar, says first home buyers who have been waiting in the wings because they did not want to buy at inflated prices have time to get their deposit together.

However, as interest rates rise, their borrowing power would continue to be depleted. Rents are rising rapidly, too, making it harder for first home buyers to save their deposit.

CoreLogic figures show that nationally, rents rose 2.7 per cent in the three months ended April 30, taking the annual increase to 9 per cent.

The number of first home buyers has been falling since early last year in the face of rising prices, with new lending in March down about 25 per cent on a year earlier, figures from the Australian Bureau of Statistics show.

However, the value of new loan commitments to investors was almost 50 per cent higher over the same period, as those buyers see better yields as rents rise. Some properties that were negatively geared may generate real income if rents continue their current trajectory.

Philip Lowe, Reserve Bank (RBA) governor, has indicated that official interest rates could eventually rise to 2.5 per cent, but with no guidance on how quickly this would be achieved. Money markets are expecting the cash rate to reach an even higher 2.75 per cent by year-end.

Shane Oliver, chief economist at AMP Capital, expects the RBA to increase the cash rate to 2 per cent by the end of 2022, and by 2.5 per cent by the middle of next year.

He says the property market is highly sensitive to the interest rate cycle because of high prices and debt-to-income ratios.

“We expect the combination of worsening affordability, along with rising mortgage rates, to drive a top to bottom fall of 10 to 15 per cent in average home prices [nationally] from mid-year out to early 2024,” he says.

Commonwealth Bank economists are forecasting Sydney dwelling prices to track Melbourne declines to fall 3 per cent this year and 9 per cent in 2023.

However, Andrew Wilson, chief economist at My Housing Market, says there is unlikely to be any significant price falls in entry level properties.

Investor activity is strong and investors tend to buy the same types of properties favoured by first-time buyers, which should help support entry level prices, he says.

With low rental vacancy rates, investors are in a position pass on their higher borrowing costs to tenants with higher rents, Wilson says.