The increasing likelihood of the international economy falling into a recession could see share prices in Australia continue their downward trajectory even if the country avoids recession itself.

Treasurer Jim Chalmers warned this week Australia will not be immune to a potential global recession, saying storm clouds are gathering in the international economy. “The weight of opinion around the world is that the global situation has gotten much worse, even in the last few weeks,” he said.

US investment manager Pimco is forecasting “shallow” recessions and rising unemployment across the large developed markets, with a swift rebound in growth unlikely. 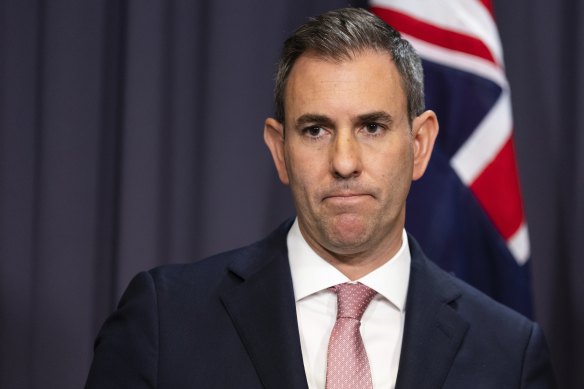 Researcher Morningstar, in its latest report on the outlook for the Australian and New Zealand sharemarket, says recessions in Europe and the United States are more likely and the “era of cheap and easy debt appears to be over.”

“[There is] potential for near-term downside [to Australian share prices] as higher [interest] rates flow through the economy”, Morningstar says.

Australian share prices have already fallen by more than 10 per cent since the start of this year, with US share prices down more than 20 over the same period. Investors prefer to hold shares in companies whose profits are resilient in tough economic times. That has seen riskier sectors, such as technology, perform particularly poorly.

Though most economists are forecasting Australia to avoid a recession – which is defined as two consecutive quarters of negative GDP – odds are higher than they were only a month or two ago.

Shane Oliver, the chief economist at AMP, has the chances of Australia falling into recession at close to 40 per cent, revised up from about 30 per cent.

While economists say the Australian cash rate set by the Reserve Bank of Australia is likely to be higher by the end of this year, it could be close to peaking. Our central bank could even start to cut rates towards the end of next year, which would be supportive of Australian share prices.

Michael Gable, founder of Fairmont Equities, says what happens with interest rates, economic growth and the sharemarket in the US is vitally important to what happens in the local market.

Even though markets are forward-looking and have already started to factor in the prospect of a global recession if the world’s largest economy was to fall into recession, our market would likely dip again, he says.

“Our market will not likely have any meaningful recovery until [inflation] numbers in the US are lower than expected, and the US Fed says it is pausing rate [rises]; that would be a catalyst for our market to head higher,” he says.

Morningstar says Australian listed companies carrying heavy debt loads, those exposed to discretionary spending and housing, and those on high price-to-earnings multiples, are the most at risk of lower share prices.

The researcher estimates our sharemarket is actually undervalued on a long-term view, but if major headwinds persist, “the bear [down] market in stocks may continue”.

Gable is optimistic about Australian shares on a 12-month view. He says markets tend to price-in recessions, which are usually short-lived, early.

“We are likely getting the end of the rate-rising cycle in Australia, and once our central bank signals that the rate rises are over, our market can be expected to trade higher”, he says.