Property price falls may be bigger than expected

Property prices could fall by more than initially feared as the Reserve Bank ratchets up official interest rates to fight surging inflation.

Even before Tuesday’s increase in the cash rate of 0.5 percentage points – in line with market expectations, to take the cash rate to 1.35 per cent – property watchers were already forecasting price falls of between 15 and 20 per cent in Sydney and Melbourne. 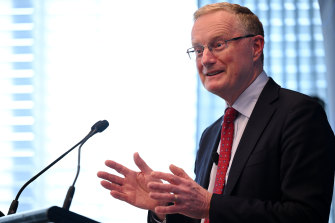 The Reserve Bank of Australia under governor Philip Lowe is determined to get inflation under control even if house prices are driven lowerCredit:AAP

However, as economists now increase their cash rate peak forecasts to as much as 2.5 per cent after the latest increase, property watchers, too, are beginning to revisit their numbers.

The widely anticipated official rate increase – if passed on in full to mortgage borrowers by lenders – would add about $140 a month in repayments on a $500,000 mortgage over 30 years, figures from Canstar show.

Combined with the two earlier rate increases in May and June, monthly payments have climbed more than $350.

Canstar figures show that if the cash rate were to reach 2.5 per cent, the average variable-rate mortgage would hit 5.15 per cent – about double the levels of fixed-rate loans only a year ago.

Sydney house prices dropped 1.8 per cent in June after a 1.1 per cent fall in May, CoreLogic figures show.

In Melbourne, house prices dropped 1.3 per cent in June after a modest 0.8 per cent decline in May.

Before the latest official rate increase, some analysts were forecasting property price falls of between 15 per cent and 20 per cent in the two major capital cities.

ANZ’s latest forecast for Sydney prices, released in mid-June, was for a decline of up to 20 per cent by the end of 2023. In May, the bank was forecasting a fall of only 15 per cent.

The bank’s economists expect Melbourne prices to drop by 15 per cent. In May, the estimate was just 11 per cent.

The Commonwealth Bank is forecasting both Sydney and Melbourne house prices to drop as much as 18 per cent by the end of next year.

Shane Oliver, chief economist at AMP, says Sydney and Melbourne are already seeing “sharp falls” in property prices, with other capital cities likely to follow, after a lag of up to six months.

“The housing market outlook is becoming increasingly skewed to the downside.”

He has lifted his forecast for the peak in the cash rate to 2.5 per cent, from 2 per cent.

Oliver is forecasting property price falls in Sydney, Melbourne and Canberra of up to 20 per cent over the next 12 months, with smaller falls in other capital cities.

Tim Lawless, research director at CoreLogic, says considering inflation is likely to remain stubbornly high for some time – and interest rates are to rise substantially in response – it is likely the “rate of decline in housing values will continue to gather steam and become more widespread”.

“Australia’s housing market outlook is becoming increasingly skewed to the downside, with the trajectory of housing values heavily dependent on the path interest rates take,” he says.

Lawless points out that unit prices are not falling as quickly as house prices.

However, there is some upside in the dire predictions. Even a 20 per cent decline in dwelling values would take the national index back to only January 2021 levels.

Also, many borrowers have buffers against rising mortgage interest rates, as they have been making repayments above required minimums, Lawless says.

However, more financial pain is on the way in the form of high mortgage repayments as the cental bank struggles to get soaring inflation under control.

The Reserve Bank is now expecting inflation to peak at 7 per cent by the end of this year, up from 5.1 per cent in the March quarter.

In an RBA statement accompanying the Tuesday’s cash rate increase, central bank governor Philip Lowe, said: “The [RBA] board expects to take further steps in the process of normalising monetary conditions in Australia over the months ahead.”