Newbie homeowners will be hit hardest by the rate hike

Many mortgage holders should easily withstand higher interest rates, but those who entered the property market recently are more likely to feel the squeeze and could find their debt rise above the value of their homes if house prices fall further in Sydney and Melbourne.

The Reserve Bank of Australia fired the starting gun on Tuesday on what will likely be an extended period of multiple rate hikes. In lifting the cash rate by 0.25 percentage points to 0.35 per cent, the first increase since November 2010, a generation of homeowners is about to experience higher rates for the first time.

The central bank is expected to lift the cash rate multiple times over the next six to 18 months, with most analysts forecasting a “terminal” rate of 2 per cent, as it seeks to bring inflation under control. 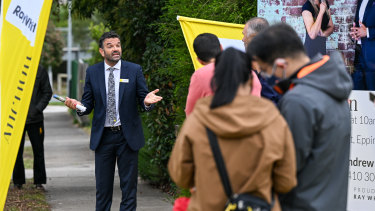 Those who entered the housing market recently are the most vulnerable to higher interest ratesCredit:Joe Armao

The cash rate may not have to go higher than that to tame inflation, given the high indebtedness of households, though money markets expect it to go higher. The big banks are expected to pass on increases in the cash rate, in full, to their variable rate mortgage customers.

RateCity figures show that if the cash rate gets to 2 per cent by May next year, someone with $500,000 owing on their loan today and 25 years remaining on their mortgage could be looking at a total increase to monthly repayments of $511.

However, the RBA said in its Financial Stability Review released last month said the typical owner-occupier with a variable-rate loan had made excess payments equal to 21 months’ worth of scheduled payments in February 2022, giving them plenty of breathing space should they struggle with higher repayments. That’s up from around 10 months at the start of the pandemic.

The RBA said if interest rates were to rise 2 percentage points, just over 40 per cent of these variable rate borrowers who make excess repayments pay enough excess to cover the rate increase.

With the 2 percentage point increase, the share of borrowers facing “high” repayment burdens would increase from about 10 per cent to just under 20 per cent, the central bank said.

Homeowners who are several years into their mortgage and have made excess repayments will be able to easily manage higher rates, but it could be a different story for some of those who are new to the property market.

With predictions that dwelling prices in Sydney and Melbourne could fall by up to 15 per cent from their peak at the start of this year to the trough at the end of 2023, or early 2024, many new homeowners could find themselves in negative equity, where their house is worth less than their mortgage.

Figures from Digital Finance Analytics from March showed mortgage stress is greatest among “young growing families”, which includes many recent first-time buyers and those living in the regions.

These households are already being squeezed by rising prices for many categories of expenditure, including non-discretionary spending such as petrol and food.

Australian Bureau of Statistics figures showed headline inflation rose 5.1 per cent for the 12 months to March 31 this year. Higher mortgage repayments will squeeze their finances even more.

Perhaps the homeowners most vulnerable to higher interest rates are those who entered the market recently on low fixed mortgage rates, whose terms are due to expire later this year and next.

There was a rush by new buyers to lock in fixed rates during the pandemic, with most taking terms of two and three years with rates of about 2 per cent. They could face mortgage rates of at least 4 per cent when they revert to variable rate mortgages.