Despite a market crash, these Australians buy their lunch with bitcoin

As cryptocurrencies weather one of their worst bear markets in recent history, Sydney technology worker Ben Kennedy is using ethereum to pay for his lunch.

The transaction – some sushi rolls costing about $10 – was far from the first time the Ultimo startup founder has used his crypto investments to pay for everyday items, with other recent purchases including gifts, drinks, and a return flight ticket to San Francisco. 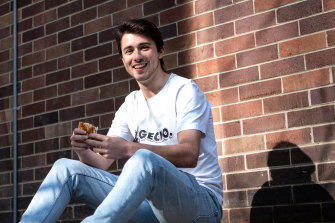 Startup founder Ben Kennedy has been buying everyday items – such as this breakfast – with crypto.Credit:Flavio Brancaleone

Kennedy has been around the crypto space since 2017 but only began using his digital assets in place of cash recently, telling The Age and The Sydney Morning Herald it was an effort to hedge against rising interest rates and inflation.

“If you look at the crypto market versus rising interest rates and inflation, I would rather take the risk even if the market tanks. I don’t have a whole lot to lose,” he said.

“Also, as a startup founder, I’m still trying to get ahead where I can. I’ve got to cut costs and manage my cash flow as much as possible.”

Given bitcoin’s original ethos of being “electronic cash”, it may seem unremarkable to see cryptocurrencies spent in place of traditional dollars and cents. However, their rampant growth over the past decade has meant most cryptos are viewed as investments akin to gold or equities, rather than something you can use to buy sushi.

Compounding this are fees and transaction time issues, which has severely hampered most efforts to turn crypto into a viable cash alternative. For example, one transaction on the ethereum network costs about 15¢ and takes 13 seconds to complete. On the bitcoin network, fees are about $2 and transactions can take up to an hour.

Kennedy’s crypto debit card is issued by local company Cryptospend, which manages the crypto side of things, so he doesn’t have to wait at the sushi shop while the transaction is completed. Andrew Grech, Cryptospend’s co-founder, says the company has issued about 4000 cards that remain popular, despite the crypto market slump.

“Volumes haven’t dropped too much, though the number of people spending has dropped. What’s interesting to see is the change in spending habits – we’re seeing more people use it on staples, such as supermarkets, fuel, and transport,” Grech said.

In the past three months, the majority of Grech’s customers have been spending their bitcoin and ethereum on groceries and restaurants, with fitness and online retail not far behind. This is different to last year – when the market was stronger – when bigger, discretionary spends were more common, he says.

“A lot of people hold crypto, but people sell it too,” he said. “We just think of it as a more convenient way of ‘selling’ small amounts. While crypto is a store of value, people still want to get value out of it.”

In some situations, spending crypto on everyday items can also be a tax boon. Australian Taxation Office guidance provides some capital gains tax (CGT) exemptions for people who acquiring and spend crypto on personal items, as long as the amount is under $10,000. However, Grech says most of his client’s transactions would likely still be liable for CGT, noting the guidance from the Tax Office is “a bit grey”.

For Kennedy, he says his spending will likely stay subdued while the crypto market is down, though he is optimistic about the future, and plans to keep cashing out his crypto to keep his personal costs down, where possible.