Tax experts have warned that some cryptocurrency traders could be on the hook for tens of thousands of dollars in unexpected tax bills due to the collapse of major stablecoin Terra, despite a crypto market crash pushing many investors into the red.

Crypto prices have cratered as much as 60 per cent in the past eight months after hitting record highs in November, when the industry’s market capitalisation topped $4 trillion. The crash means investors are more likely to report a loss on their crypto trades for the past financial year. 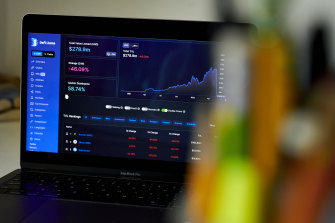 The collapse of stablecoin Terra could see some traders exposed to unexpectedly high tax bills.Credit:Bloomberg

The Australian Taxation Office (ATO) treats crypto as property, rather than currency, meaning investors have to pay capital gains tax on any windfalls they receive when buying and selling bitcoin, or other digital assets.

Crypto tax has been in the crosshairs of the ATO, especially following the 2021 financial year when many traders reported capital gains thanks to bullish markets fuelled by the pandemic.

However, tax professionals have warned traders who participated in popular crypto “staking” schemes could find themselves with unexpectedly high tax bills this year.

“Staking” is similar to term deposits, where holders of crypto agree to lock up their assets for periods of time, in exchange for a percentage-rate reward. The staked assets also help run the blockchain network.

However, rewards earned via “staking” are categorised by the ATO as ordinary assessable income at the time they are earned, meaning they can bump up an investor’s tax bracket – if the reward is substantial. This becomes particularly significant if the value of a crypto asset plummets, such as the case with Terra, an algorithmic stablecoin that sensationally collapsed in value in May, wiping out more than $80 billion in value.

Shane Brunette, co-founder of crypto tax software provider CryptoTaxCalculator, told The Age and Sydney Morning Herald he was aware of one case where an investor had staked $1 million in Terra at a 20 per cent return rate, earning him $200,000 in additional income. This pushed them into the top tax bracket of 45 per cent.

However, with Terra now worth less than a tenth of a cent – compared to the $1 value it held before the collapse – the investor has no money to pay their now oversized tax bill.

While Terra is the most extreme example, many other popular “staking” scheme coins have also seen their values crumble during the crash, and could pose a similar issue for investors who opted to keep their rewards in crypto rather than convert them into fiat currency. 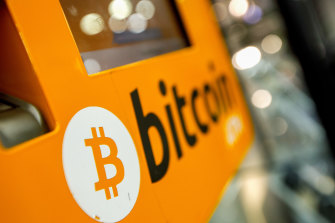 Bitcoin has continued its slide as US inflation figures spook investors,Credit:Bloomberg

Elinor Kasapidis, senior manager of tax policy at CPA Australia, says these are the risks crypto traders need to be aware of when engaging in “staking” investment strategies.

“It can occur with share investments and other sorts of investment schemes but, with crypto, given the volatility and the higher level of risk, the consequences can be greater,” she says. “Especially as some investors are quite inexperienced and aren’t aware of the tax consequences.”

Brunette says crypto traders who have made a loss in the past financial year, especially in complex scenarios such as the Terra/Luna collapse, should consult a tax agent and file their return sooner rather than later, so they can offset the loss against possible future capital gains.

Brunette says he would like to see more regulation for products such as Terra, and that operators of rewards-based crypto schemes should warn users about potential tax bills.

“There needs to be more warnings for users participating in these ‘staking’ reward projects. It appears many participants aren’t aware of the tax consequences until after the fact and, at this stage, it might be too late,” he said.

ATO assistant commissioner Tim Loh said crypto continued to be one of the Tax Office’s highest priorities, even through the market crash.

“This year, we have collected data for over a million taxpayers who will be reminded to declare their capital gains or capital losses when they prepare their tax returns,” he said.

“We will also be on the lookout for incorrect claiming of paper losses, revenue losses and wash sales given the market downturn in the later half of the year.”