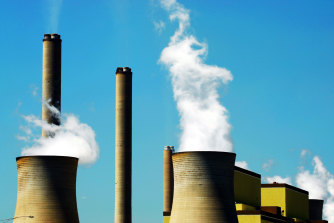 Labor has indicated a willingness to use the safeguard mechanism to drive net emissions to zero by 2050.Credit:Jessica Shapiro

To ensure reductions are not simply offset by rising emissions in other areas, the Abbott government introduced a “safeguard mechanism” to set a baseline of allowable emissions for some of Australia’s largest polluters, who face penalties if they exceed them.

While the previous government chose not to use the safeguard mechanism to drive down allowable emissions, Labor has indicated a willingness to do so to drive net emissions to zero by 2050.

“This will also significantly reduce the call on the budget,” Kennedy told a celebratory dinner to mark the 100th anniversary of the School of Economics at the University of Sydney on Wednesday night. 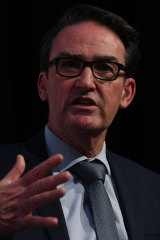 Reflecting on more than two decades of climate policy flip-flopping, Kennedy said he remained optimistic, likening progress on climate reforms to the long road before the introduction of Medicare or the GST.

“It can be a little frustrating to see what you consider to be good ideas fail to win the day and underpin policy. However, closely observing the sharp end of Australia’s governments of both complexions, I remain optimistic that good ideas ultimately win through, even if sometimes it may take a little longer than we might hope.”

A former deputy secretary of the Department of Climate Change and Energy Efficiency during the design and introduction of the Gillard government’s ill-fated emissions trading scheme, Kennedy praised that scheme as “a significant achievement” and “textbook-perfect example of what academics would recommend in addressing the externality of climate change”. The scheme operated for two years before it was axed.

It did, however, “contain some compromises” which ledto its undoing, Kennedy said.
“In particular, the fixed-price start to the scheme which came about because agreement could not be found on emissions targets.”

It was this fixed-price feature that led Gillard, under sustained questioning, to publicly concede it acted a bit like a “carbon tax”.

“This compromise would later prove to be one of the key aspects of the scheme that contributed to its political demise,” Kennedy said.

However, Labor’s new proposal to expand use of the existing “baseline and credit scheme” was also “seen in many textbooks” and “when operated effectively, can reduce emissions in an economically efficient way”.

Under Treasurer Jim Chalmers, Treasury has taken on renewed responsibility for internal modelling of the impact of climate change on the Australian economy. Kennedy, who headed the secretariat to support economist Ross Garnaut to update his climate review in 2010, said Garnaut’s review remained “a foundational document”.