Traders Moving To Metaverse Projects! $1 Trillion For Metaverse Is Imminent?

According to the experts’ recent estimate, the crypto metaverse ecosystem might be worth more than $1 trillion in a few years if the market continues to grow at its current rate.

Grayscale’s “Meta Thesis” was explained in the study, which traced the growth of early Internet infrastructure like Netscape to impending Metaverse apps like Decentraland over the past 30 years. The amount of time people spend utilizing web-based technology is increasing, according to Grayscale. The company believes that as people spend more time online, they will spend more money in virtual places.

People are now spending a considerable portion of their daily time on digital activities such as watching television, playing video games, and engaging with friends on social media platforms, according to analysts. They also identified a number of key variables that they believe would help to fuel the growth of crypto metaverses, such as social networks, non-fungible currencies, and gaming, with income from virtual game worlds expected to rise from $180 billion in 2020 to $400 billion by 2025.

According to the paper, if the Metaverse world keeps growing at its current rate, it may become a trillion-dollar enterprise by next year. The graph below depicts the increasing number of Metaverse wallets, which reached new highs in the fourth quarter of 2021. 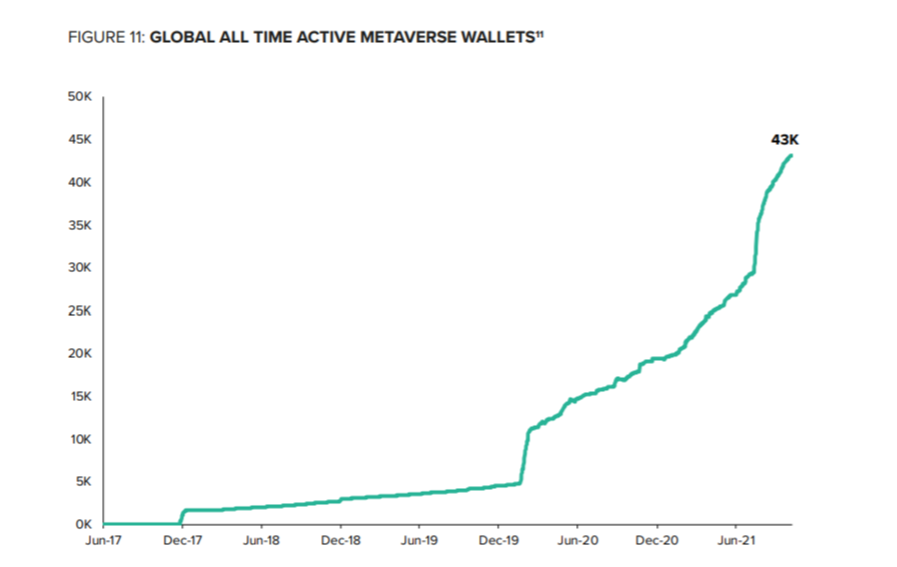 Metaverse is the new trend

One of the reasons for the metaverse’s rapid growth is its intimate ties to the gaming industry, which allows gamers to convert their virtual assets into real-world assets. This is made feasible by Web 3.0, which is gradually displacing Web 2.0.

non-fungible tokens enable play-to-earn functionality in the gaming industry (NFTs). These tokens allow users to gain digital assets in the form of NFTs, which they may trade with other players. Players can also utilize these tokens in a variety of digital experiences, resulting in a “free market internet-native economy.”