El Salvador continues to stack Bitcoin (BTC) as the price of the virtual currency falls below $47,000 for the first time since October. Nayib Bukele, El Salvador’s president, announced that they have purchased 150 BTC at an average USD price of $48,670. Bitcoin fell by over 30% from its all-time high of $69,000 reached a few weeks ago.

El Salvador, the first country in the world to make Bitcoin legal tender has acquired 150 more Bitcoin as the largest digital currency falls below $47,000 for the first time since October. The country has now over 1,000 BTC.

It is worth taking into consideration that Bitcoin flash-crashed below $47,000 to $42,200 a few minutes after El Salvador’s decision to acquire more BTC. El Salvador seems to be acquiring BTC every time the virtual currency falls considerably. Nayib Bukele explains that they are “buying the dip.”

Moreover, El Salvador has also been involved with different Bitcoin investments. The country released the so-called “Bitcoin Bond” in order to get the necessary funds to build a massive Bitcoin mining facility that would protect the BTC network using volcano energy.

Bitcoin seems to have been highly correlated with stocks and traditional markets over the last few months. This correlation could already be seen when BTC fell in March 2020 with the expansion of the Coronavirus crisis. 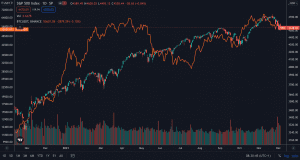 In the image above you can see the correlation that there has been between Bitcoin and the S&P over the last year. But there are other things that could be affecting Bitcoin as well. Let’s not forget that after 18 months of QE and money printing from governments, central banks are starting tapering and increasing interest rates.

This type of environment is not bullish for traditional markets or Bitcoin. This is why we see that the virtual currency and also stocks are currently falling. Let’s also not forget that Bitcoin operates during the weekends as well. Nonetheless, weekends seem to be less volatile and calmer for the price of the largest cryptocurrency.

As new institutional and large investors entered the market, volumes seemed to decrease over the weekends. In the past, when Bitcoin was a financial instrument for retail investors, weekends had the same trading volume as working days. It would be interesting to see what Bitcoin would do from current levels, whether it would keep falling or if it would start an accumulation period in this region.