Dogecoin investors are laughing all the way to the bank. The price of DOGE, the native cryptocurrency of the Dogecoin network, has been climbing higher over the past week and has risen an astounding 76% over the past 24 hours to hit a new all-time of $0.136.

The price of DOGE has been on an absolute tear in recent weeks. The cryptocurrency started the week trading at $0.05 and finally obliterated the $0.1 hurdle earlier today. As of now, DOGE is up roughly 2,875% from its valuation at the beginning of the year. Throughout the months, it hit record highs after record highs, reaching its newest peak just below $0.14 today. 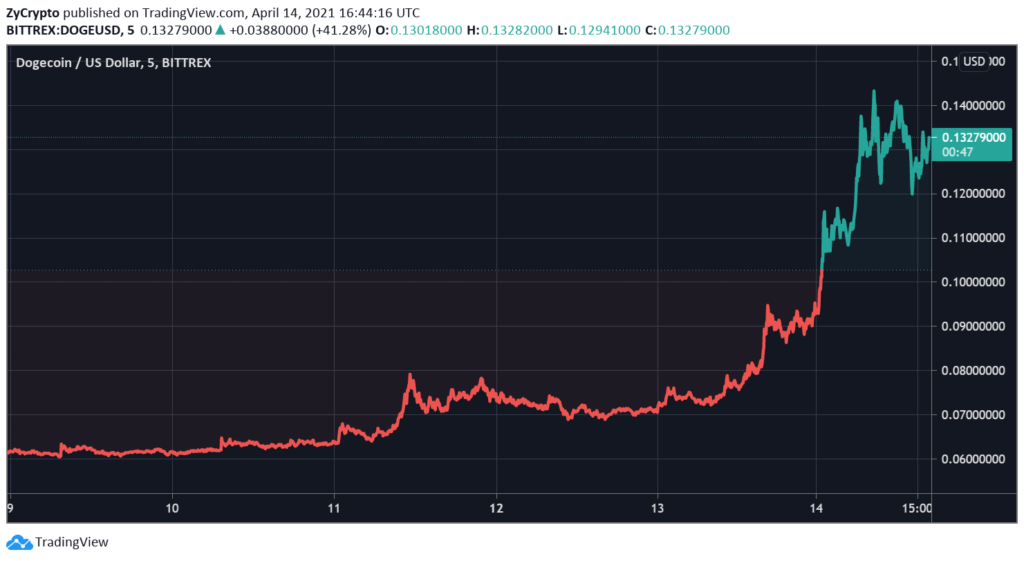 However, price is not the only metric by which DOGE is growing. The coin has seen its market capitalization grow to $17.43 billion at press time, enabling it to overtake Chainlink (LINK) to become the world’s 10th most valued cryptocurrency.

DOGE’s parabolic rise comes in the midst of a raging bull run among several cryptocurrencies, including bitcoin which soared past $64,000. The second biggest crypto, ether (ETH) , also pushed to a near all-time high near $2,400. The upsurge was likely fuelled by the anticipation around Coinbase’s direct listing.

The San Francisco-based exchange is poised to become the first cryptocurrency-focused company to be listed on Nasdaq. Observers have suggested that the listing could push the value of the aggregate crypto market higher as it will be the bridge traditional investors use to tap into crypto-assets.

While this is enough to explain why cryptocurrencies in general are posting gains right now, it doesn’t fully explain DOGE’s particularly outstanding performance, given Coinbase has not even added the coin to its trading platform.

Over the past months, DOGE has received optimistic and positive recognition from celebrities and moguls like Tesla and SpaceX CEO Elon Musk. Musk, who added $1.5 billion to Tesla’s balance sheet, has repeatedly praised dogecoin on Twitter.

Although Musk has clarified that his tweets regarding dogecoin are “meant to be jokes”, the market does not care. Earlier this month, he posited that SpaceX would “literally” take dogecoin to the moon, and the price of the coin spiked over 30% following that tweet. In a tweet earlier today, Musk posted a GIF of a laughing Shiba Inu — the dog that dogecoin is based on.

Besides Musk, Dogecoin has also garnered the support of rapper Snoop Dogg and Mark Cuban.

The cryptocurrency can continue on its uptrend as long as it is able to strongly hold above $0.08.