Fewer people have fallen victim to cryptocurrency scams in 2022 so far due to falling asset prices and the exit of inexperienced crypto users from the market, a new crypto crime report reveals.

According to an Aug. 16 report from Chainalysis, total crypto scam revenue year-to-date is currently sitting at $1.6 billion, equating to a 65% decline from the prior year period, which appears linked to the declining prices of cryptocurrencies.

“Since January 2022, scam revenue has fallen more or less in line with Bitcoin pricing. […] it’s not just scam revenue falling — the cumulative number of individual transfers to scams so far in 2022 is the lowest it’s been in the past four years.”

Chainalysis’ Cybercrimes Research Lead Eric Jardine, the author of the report, explains that crypto investors are more likely to fall for scams during bull markets when the investment opportunities and outsized returns are most enticing to victims. 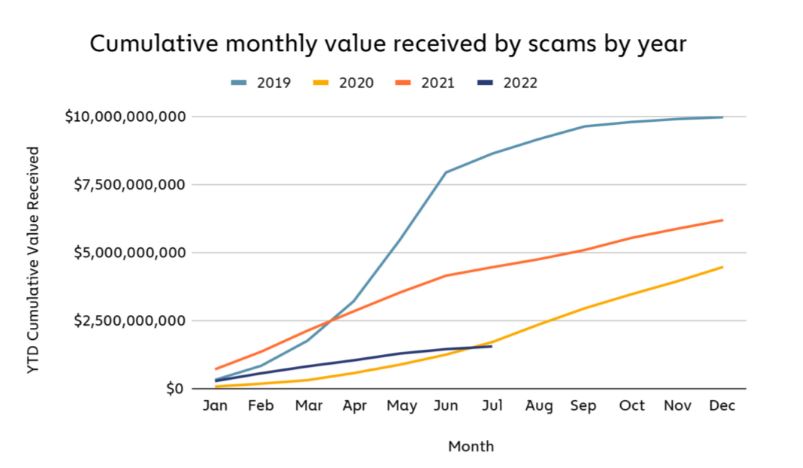 The researcher said the results are also skewed due to the comparatively large PlusToken and Finiko scams in 2021 which netted $3.5 billion in total scam revenue.

Conversely, Jardine notes the largest scam of 2022 so far has only netted $273 million, and is related to cannabis investing platform JuicyFields.io, which has reportedly locked investors out of their accounts on their cannabis-focused “e-growing” service.

While scam revenue has fallen in the year, Jardine notes that crypto-based hacking has bucked the trend, increasing 58.3% through July 2022 to $1.9 billion, a figure that does not include the $190 million Nomad bridge hack that began on Aug. 1. 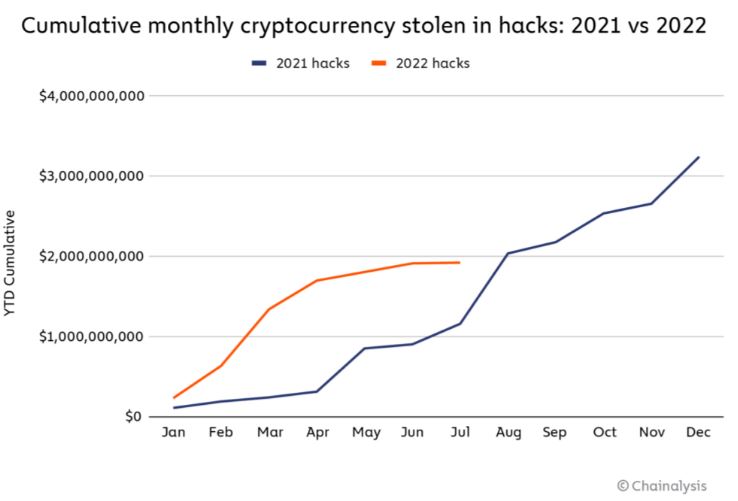 Jardine said that this increase is largely attributable to the rise of DeFi applications that skyrocketed in 2021:

“DeFi protocols are uniquely vulnerable to hacking, as their open source code can be studied ad nauseum by cybercriminals looking for exploits.”

But Jardine added that it’s not all bad, as smart contract programming languages like Solidity are relatively new and these exploits can “be helpful for security as it allows for auditing of the code.”

The report also noted that a large concentration of these hackers came from North Korean elite hacking units such as Lazarus Group, with approximately half of crypto stolen in hacks coming from these groups alone.

Jardine also noted that darknet market revenue is down 43% so far in 2022, due mainly to German law enforcement shutting down Russian darknet Hydra Marketplace’s servers on Apr. 5.

Darknet markets are dark web black markets that offer illicit goods and services for sale, often using cryptocurrencies as a method of payment.