I have been a liberty activist for about twenty years now. In high school, I used to give presentations to my class about the problems of fictional legal entities, fiat currency and systems that were built on piles of debt and complicated legal structures that turn citizens into free-range slaves on national plantations by de facto due to the nature of border laws, property rights and the presumed victors of the sovereignty struggle between man and state. I was an ideologue steeped in Rothbard, Spooner, Locke, Mises, Hayek and the rest of them. Somewhere between Classical Liberalism and Anarcho-Capitalism, I believed there was a kinship among the value creators of society, and that we could create a society based on property and contract-based relationships as long as good people could lead by example.

Sometime between 2004-2008, I became aware of the modern “Celebritarian” movement of people writing books, blogging and making video content about libertarian activism. This included things like “liberty audits” of police, protests against Federal Reserve monetary policy, and in my situation culminated in the volunteering for Ron Paul’s presidential bids in 2008 and 2012. I recall the content of Adam Kokesh, Stefan Molyneux, Larken Rose and other libertarian influencers calling to “End the Fed,” revert to the gold standard, fix the money and end the state.

It was an inspiring time full of fiery personalities and all connected to a fabric of cooperative individualism that united most of us in vision. In 2012, after Republican Party rules stripped Dr. Paul of delegates that he had won in order to hand them to Mitt Romney of Bain Capital (an advisory firm to Digital Currency Group, by the way), which led to my personal decision never to participate in an election ever again. I had decided that since the primaries in both parties are rigged by party insiders, there was no longer a reason to vote at any level in national politics, and that my energy was better focused on local activism and business.

Against that backdrop, I earned my first bitcoins from a local activist who paid me for a small, local job, and I recall watching a video about Bitcoin from someone who I did not know: Roger Ver.

For the uninitiated, Ver was the first Bitcoin venture capitalist, but he was famous for his silver-tongued passion for Bitcoin as a tool to increase the cause of freedom worldwide. This spoke to me at a fundamental level, and led me down the rabbit hole. In this era, I recall the conversations about the power of digital cash in Facebook groups where nobody spoke about investment thesis, but everyone waxed on about business opportunities that would force the state (through incentives, not violence) to change into a more voluntary and competitive model because of the market efficiencies that Bitcoin would create with reduced fees and reduced friction in business. Through obsolescence of state functions, we would all become freer, and by the value bitcoin could create in business, we would all become more wealthy!

Then the small blockers showed up.

It’s hard to pinpoint exactly when I realized that there were investment-focused people in the Bitcoin space who saw Bitcoin as a “get in now, or you’ll regret it” opportunity, but I do remember the first time someone explained the small block thesis. I laughed because it struck me as such an absurd idea that nobody would relinquish the business and freedom opportunities of Bitcoin just for the sake of absorbing fiat currency valuation on their holdings. It struck me as lazy and short-sighted, but also so extremely uninteresting that it would never take off an idea—much less the dominant worldview in Bitcoin just a few years later.

As the ideals of small block Bitcoin started to gain traction among the “get rich quick” crowd, it was bizarre to see guys like Peter Todd and Gregory Maxwell espousing Bitcoin’s flaws with such fervor, and their need to re-engineer Bitcoin away from being a global electronic cash system. In my mind, I was simply grateful that their bad ideas were a minority for the first few years of my honeymoon phase in Bitcoin. 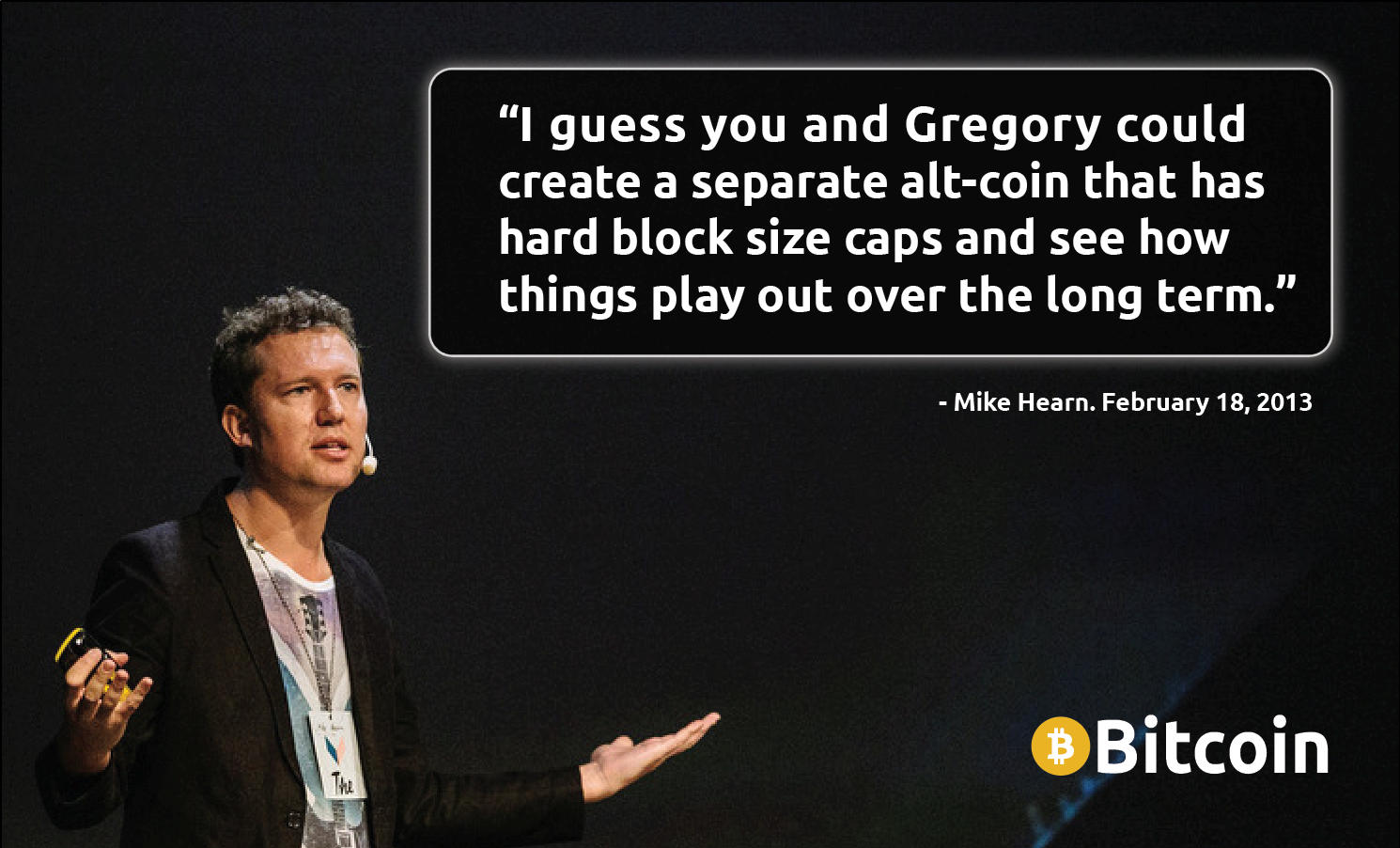 Then came the vipers

In 2013, Peter Todd was paid by U.S. intelligence asset named “John Dillon” to code up and push “Replace by Fee” (RBF) protocol into Bitcoin Core and to start advocating for the need to protect decentralization of Bitcoin “for freedom” by limiting its abilities to scale on chain with the inherent incentives of the bitcoin system. Under the auspices of freedom, the investment thesis started to supplant the cash thesis of bitcoin, but intelligence agents were paying developers to produce propaganda such as this about the necessity for bitcoin to stop scaling on chain. But the reason why, based on following the money, seems to have been the general pacification of the libertarian bitcoin movement. In 2012, The Romney Republicans successfully crushed the libertarian wing of the party at the same time that companies like MasterCard, New York Life, AXA Insurance and other old world financial titans were starting to research the existential threat of bitcoin as an uncontrollable competitor to their hegemony.

If libertarians and other people who generally question the pillars of hierarchical authoritarianism had lost any hope toward reforming the state, but also had been given the gift of Bitcoin as a tool to undermine the absolutist silos of global finance, then such people remained a problematic wildcard to the powerful elite and their surrogates. But what better way to pacify such fervor than to soften their passions with the dispensation of wealth in a fiat-fueled pyramid to raise the libertarian activist Bitcoin proletariat and move them into the petty bourgeoisie where they would likely cease fighting for their ideals and transition to protecting their new relative wealth.

And they were quite successful!

“We Accept Bitcoin” turned into “Buy Bitcoin” and then degraded further to “HODL” as the libertarians became content with wealth in exchange for their freedom while attacking anyone who still fought for the revolution of economic efficiency. Now content to join the lower rungs of the aristocracy, BTC is no longer a threat to the hierarchy at all. In the minds of the small blockers, MasterCard and Visa partnerships are “bullish,” and we should all cheer when Kraken accepts investment money from “RIT Capital,” the new name for Rothschild Investment Trust. And so BTC celebrates anything “bullish” no matter the costs. The small blockers are content to call Michael Saylor “GigaChad” even though his company is opposed to any vestige of individual data privacy. Why? Because it’s bullish. Does it matter that “Strike” is a Visa Partner founded by the son of a Chicago Board of Trade President? No. Because it’s bullish. Does it matter that Blockstream and Lightning Labs have World Bank insider Lawrence Summers as advisors through the venture wing of Digital Currency Group. Nah! IT IS BULLISH!

BCH is plagued by a lack of principled vision and therefore mired in chaos, as the former maximalist Ver talks about “the power of crypto currencies.”

In the name of bullishness, BTC has joined the mainstream, and not on Bitcoin’s terms, but completely on the terms of the centralized systems of power that have kept economies planned, stratified and polarized since the beginning of the central bank era.

So what can we do?

That’s the real question. Big blockers left for BCH and then BSV. Other potential allies have settled themselves into development of Dash, DigiByte and dozens of other “digital cash” projects, and most new energy is focused on short term gains on altcoin trading, pyramid schemes and other scams like DeFi.

I firmly believe that BSV can win the long term game with a focus on goals like building fundamentally sound tooling and focusing very hard on business development of clients that can generate profits with reduced payment friction and increased data integrity. With a fixed protocol “set in stone” and no arbitrary limits at the protocol level, the original vision of Bitcoin allows libertarians their ideal electronic cash system while also creating incentives for businesses and other entities to benefit from contract-based business models secured by proof of work, and securing global identities from fraud and unauthorized use of personal data.

It’s not the revolution the way I envisioned it in 2012, but we don’t always get the outcomes that we envision. Alliances have shifted, but for me, the goal is still the same! Free the world with an extreme focus on business development and advocacy of bitcoin’s first principles! With BTC fully aligned with banksters and globalist financial titans, they can be fully written off while we do the business of making the world a better place for free markets and free people.