New Jersey-based crypto financial institution BlockFi confirmed a data breach incident via one of its third-party vendors, Hubspot. BlockFi’s proactive warning about the breach aims to deter the intentions of bad actors in repurposing the user data for fraudulent activities.

According to the announcement, the hackers gained access to BlockFi’s client data on Friday, Mar. 18, that were stored on Hubspot, a client relationship management platform:

“Hubspot has confirmed that an unauthorized third-party gained access to certain BlockFi client data housed on their platform.”

As a third-party vendor for BlockFi, Hubspot stored user data such as names, email addresses and phone numbers. Historically, bad actors have used such information for conducting phishing attacks and gaining access to accounts through user-provided passwords.

At the time of writing, BlockFi is supporting Hubspot’s investigation to gain clarity on the overall impact of the data breach. While the exact details of the breached data are yet to be identified and revealed, BlockFi reassured users by highlighting that personal data — including passwords, government-issued IDs and social security numbers — “were never stored on Hubspot.” 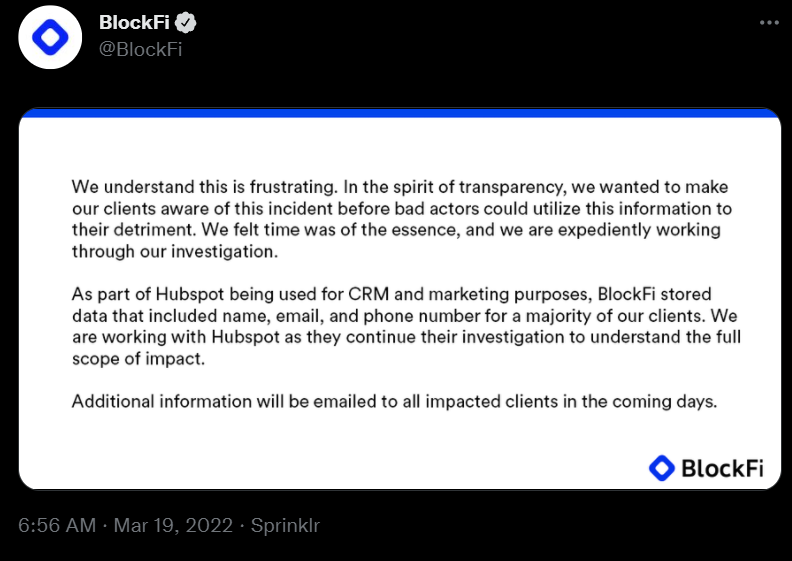 In addition, BlockFi has also confirmed that its internal system and client funds were not accessed and that the breach remains limited to the third-party vendor, Hubspot. 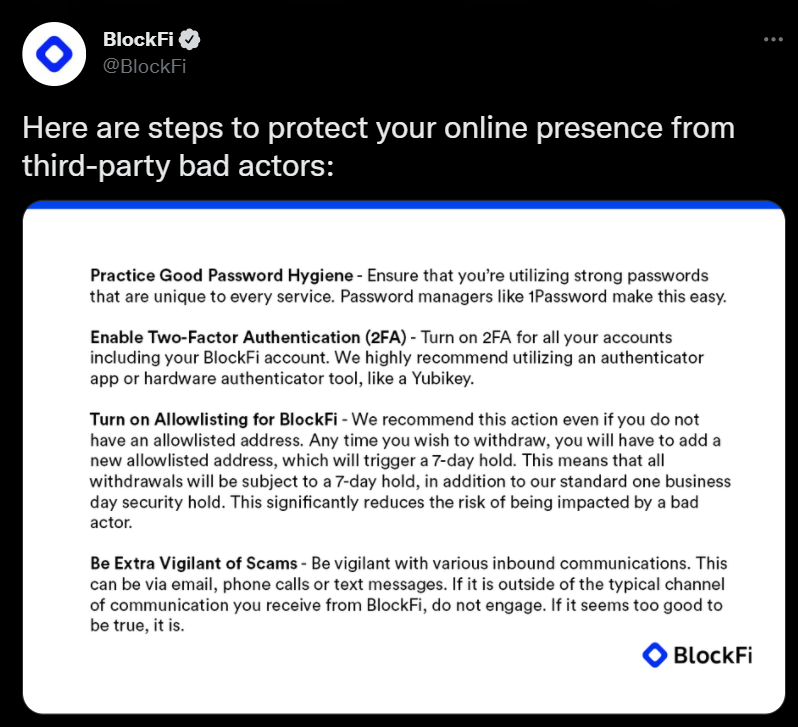 On an end note, BlockFi acknowledged that time is of the essence and are expediting their investigations to identify the extent of the breach:

“Additional information will be emailed to all impacted clients in the coming days.”

Investors are advised to be wary of all company communication, especially that demand urgency in requesting/changing personal details including passwords and wallet addresses.

On Friday, Mar. 18, the recently launched nonfungible token (NFT) project Rare Bears was attacked, resulting in a theft of nearly $800,000 in NFTs.

As Cointelegraph reported, the attacked was conducted by a hacker who posted a phishing link in the project‘s Discord channel, and eventually stole 179 NFTs.