The 13th birthday of the Bitcoin (BTC) white paper has crept up just as the world continues to deal with a global pandemic, inflation fears, an astounding memecoin mania trend and growing institutional adoption of the cryptocurrency space.

Satoshi’s white paper came in a message titled “Bitcoin P2P e-cash paper,” in which Nakamoto explained that his digital currency is fully peer-to-peer (P2P) and requires no trusted third party for a transaction to occur. Through a peer-to-peer network, Bitcoin solved the double-spending problem. Bitcoin also allowed network participants to remain anonymous and was secured through a proof-of-work (PoW) consensus algorithm. 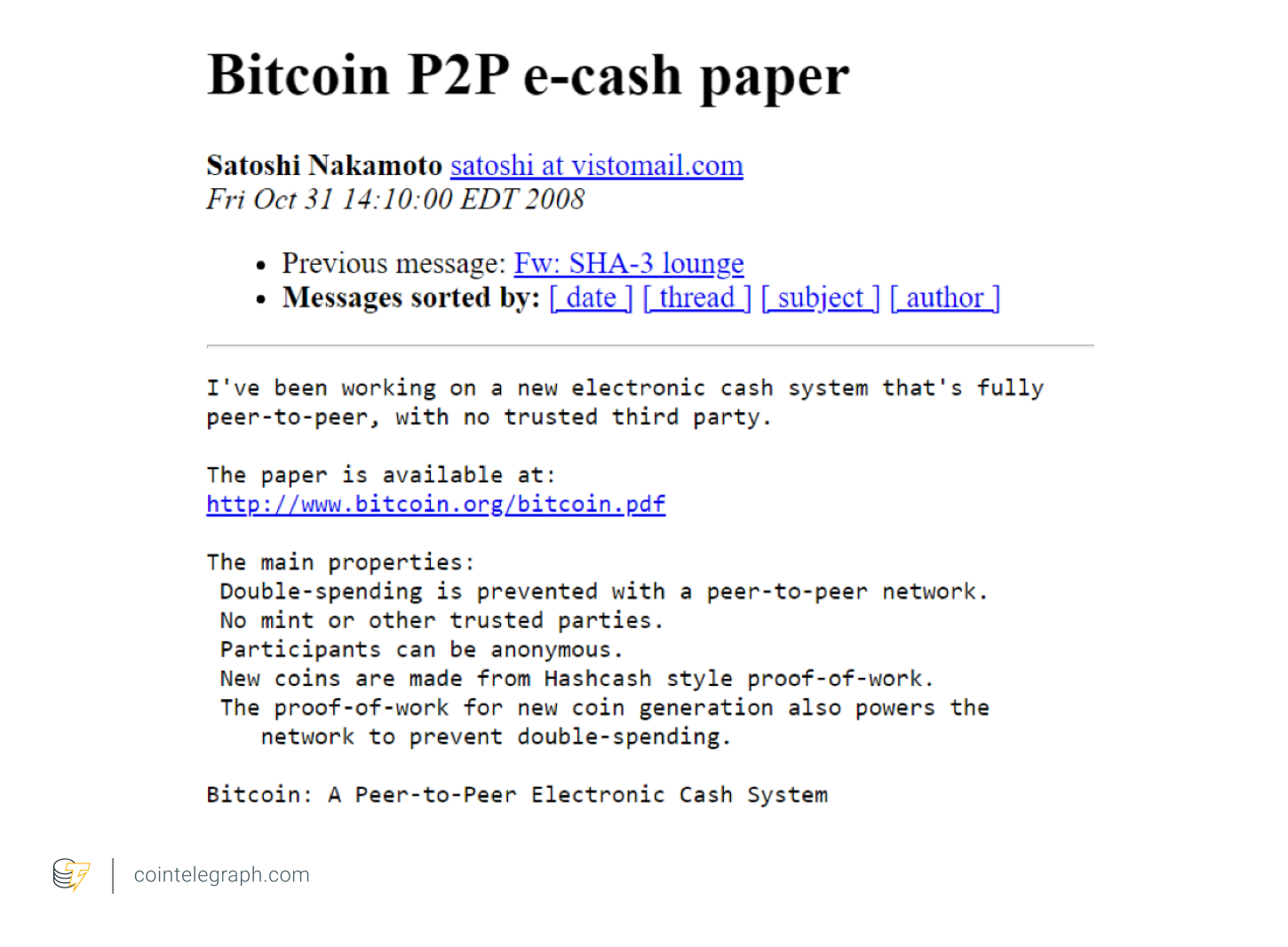 At the time, the white paper wasn’t received the way people would expect it to be, knowing what they know today. Only a handful of people saw Nakamoto’s email and replied with their thoughts and concerns surrounding Bitcoin.

Speaking to Cointelegraph, Leo Matchett, co-founder and CEO of Decentralized Pictures, a non-profit organization supporting independent filmmakers, said that the Bitcoin white paper “is the genesis of a new era in monetary sovereignty,” adding, “Satoshi stood on the shoulders of giants and solved problems that those who came before could not.”

Matchett opined further that the white paper “was truly the beginning of a new era for monetary systems of the world” because it “brought forth the idea that decentralization has more value than centralization.” Indeed, the idea of Bitcoin attempted to solve numerous problems including counterfeiting, steep on-ramps and counterparty risk.

After the white paper was shared on the cryptography mailing list, slowly but surely, discussion surrounding the document started growing, with the Bitcoin network being launched in early 2009. At that time, Hal Finney, a cypherpunk that worked with the PGP Corporation developing leading encryption products, was already involved.

Hal Finney is well-known in the cryptocurrency space for being involved in the first Bitcoin transaction and being the first person after Nakamoto to run a copy of the network through a node. After setting it up, Finney tweeted he was “running bitcoin.”

The cypherpunk, who tragically passed away in 2014 as a result of ALS complications and had his body cryopreserved by the Alcor Life Extension Foundation, described his work with Satoshi in a forum post where he revealed he started mining BTC on “block 70-something,” and that after some correspondence, Satoshi sent him 10 BTC to test whether the network worked.

At the time, there was no demand for space on the blockchain, so the transaction was successfully processed with a 0 BTC fee attached to it. The 10 BTC were worthless at the time, but the transaction helped fix some bugs in BTC’s early days. 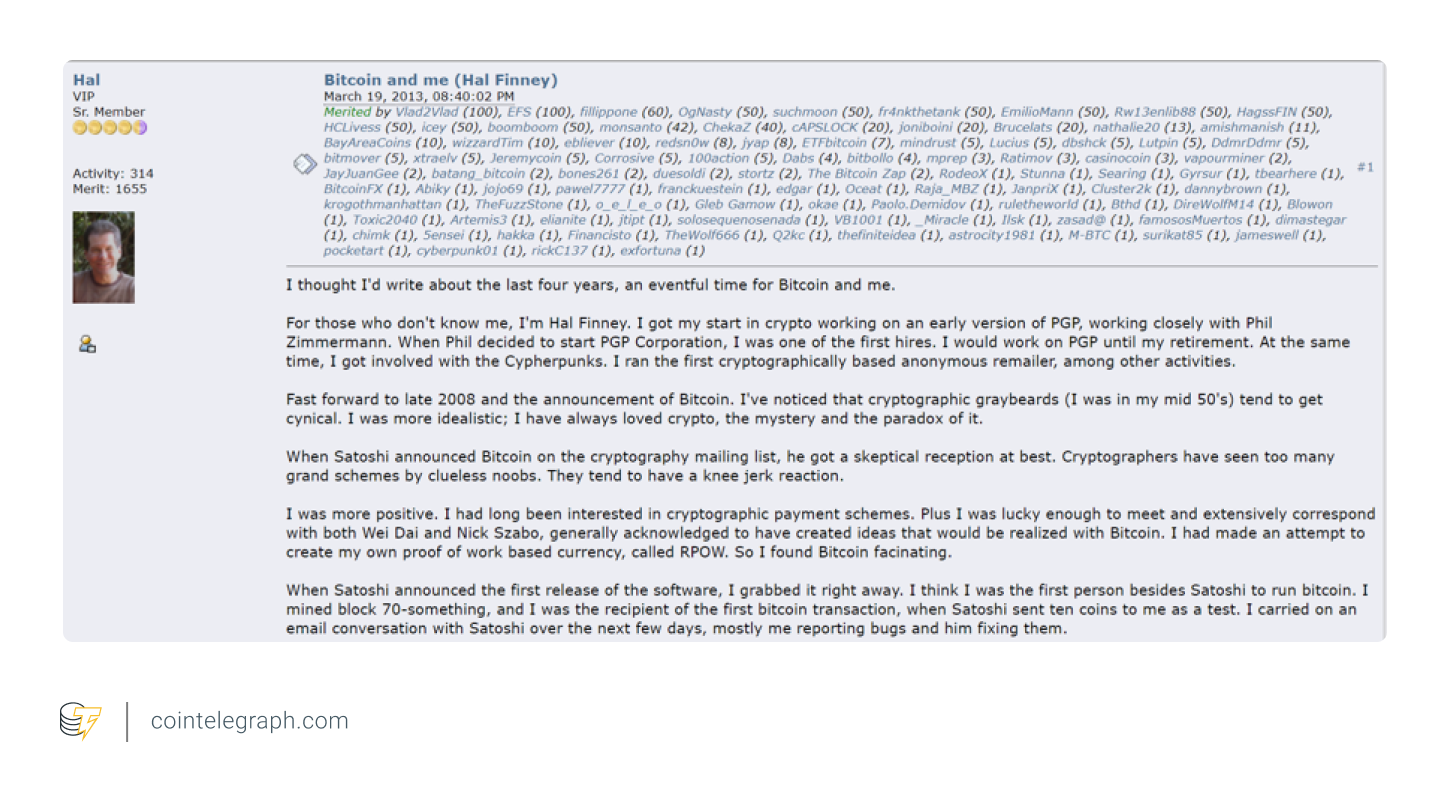 That first Bitcoin transaction made it clear that the network worked, and while there was still a lot of work to be done to get where it is today, it was a first step in the right direction. A year later, in 2010, the first commercial Bitcoin transaction would occur.

On May 18, 2010 developer Laszlo Hanyecz created a post on the Bitcointalk forum offering 10,000 Bitcoin “for a couple of pizzas.” Hanyecz offered to pay another forum member the coins if they got him two large pizzas, which could even be homemade.

The post was met with skepticism, as 10,000 BTC at the time weren’t worth the cost of two pizzas, or were anywhere near it. Only on May 22, after a follow-up, did Hanyecz report that he “successfully traded 10,000 bitcoins for pizza.”

At the time and despite Bitcoin’s low value and the community’s small size, one user noted that a “great milestone was reached.” That day is now known in the cryptocurrency community as the “Bitcoin Pizza Day.”

The first commercial Bitcoin transaction led to the creation of an ecosystem now worth over $2 trillion and proved that Bitcoin has a number of use cases that need to be considered. For the first time ever, Bitcoin was used as a true medium of exchange.

The cryptocurrency’s price would rise over time, partly because of adoption and partly because of speculators looking to profit off of its incredible volatility. In the midst of all that, new businesses were created in what ended up becoming a large asset class.

Speaking to Cointelegraph, Miha Grčar, head of global business development at cryptocurrency exchange Kraken, said: “no one could have predicted the tidal wave of change unleashed by the publication of a 9-page PDF.”

The Bitcoin white paper, Grčar said, laid out a vision for a digital currency that can be used as a store of value and medium of exchange independent of centralized control. Per his words, the potential it has hasn’t been fully unleashed:

“It turned out to be a breakthrough of such historical importance and magnitude that even thirteen years on, we’re barely scratching the surface.”

Bitcoin, he said, instigated a “paradigm shift that now underpins a multi-trillion dollar industry” and showed the world there was a better way where “sovereignty, finance and individual freedoms all co-exist outside the clutches of corrupt outdated socio-economic systems ridden with insiders, cronies and backroom deals.”

As understood from the first commercial Bitcoin transaction, BTC’s value hasn’t always been clear. The cryptocurrency has gone through substantial crashes in its history and has been declared “dead” over 400 times by popular media outlets and analysts.

Bitcoin’s market cap is now above $1.16 trillion, according to Cointelegraph Markets Pro. While most wish they could have heard about the cryptocurrency in 2010 or 2011 to invest in it and build up wealth through that investment, most would have likely failed to see how big BTC would get.

Bitcoin’s rise has been supported by a thriving industry filled with innovation that has already seen cryptocurrency exchanges start trading on the Nasdaq exchange and by institutional investors who recognize that BTC can be used to diversify their portfolios and hedge against inflation.

Earlier this year, El Salvador became the first country in the world to adopt Bitcoin as legal tender with the country’s Bitcoin Law officially coming into effect on Sept. 7. El Salvadorans can use the cryptocurrency through a wallet called Chivo launched by the government that uses the Lightning Network, a layer-two scaling solution.

Speaking to Cointelegraph, Javier Moro, chief product officer at Latin American cryptocurrency exchange Bitso, noted that El Salvador’s move was “rooted in hope for a better future for El Salvadorans,” and its success will depend on the spread of cryptocurrency-related knowledge in the country.

More is yet to come

Earlier in October, the first Bitcoin exchange-traded fund (ETF) was launched in the United States. The ProShares Bitcoin Strategy ETF began trading under the ticker BITO on the New York Stock Exchange. It became the second-most heavily traded fund on record in its debut.

In a statement sent to Cointelegraph, Ron Levy, CEO and co-founder of blockchain consulting firm The Crypto Company, stated that the Bitcoin white paper “laid the groundwork for what would become a decentralized industry beyond what anyone thought was possible.”

The next leap in this space, he said, are “clear laws and regulations around what can and can’t be done with crypto currency.” But, it’s obviously not clear how that may turn out, as all new technological breakthroughs face resistance from established mechanisms.

Brittany Laughlin, executive director at the Stacks Foundation, which bridges decentralized finance (DeFi) and the Bitcoin network, told Cointelegraph that Bitcoin has come a long way from just being a store of value, as it’s “now possible to build smart contracts on Bitcoin, welcoming the millions of BTC holders to the world of DeFi, NFTs and true ownership.”

Notably, Satoshi Nakamoto seemingly predicted that additional blockchains could use tokens, which they called “domain objects” at the time, to represent ownership of assets. Satoshi’s example was for a token representing the right to own a domain for a year.

As Grčar said, humankind has only begun scratching the surface of what Bitcoin and blockchain technology are capable of. So much so, that the developments we have today were seemingly thought of by Bitcoin’s creator, Satoshi Nakamoto.

The Bitcoin white paper has made the idea of a decentralized network viable and proved that even a short nine-page document was able to change the world in ways so radical they may be hard to comprehend even at this point in time.

While it isn’t clear whether more countries will adopt BTC as legal tender in the future, or whether interest for Bitcoin ETFs will wane, it appears clear that Bitcoin is here to stay and serve as both a store of value and medium of exchange, and that’s only 13 years after the idea was first introduced. Imagine what will happen in the next 13 years.