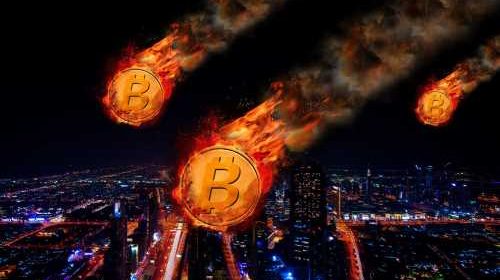 If we thought bitcoin was doing poorly before, we are having to redefine our ideas. It looks like the world’s number one digital currency by market cap has fallen below the $50,000 mark and at the time of writing, is trading for just over $49,000.

Bitcoin Is Suffering Harder Than It Has in a While

This marks a $5,000 drop for the asset in just the past 24 hours and a fall of more than $15,000 for the currency over the past two weeks. The currency appears to be dipping into bearish territory for the first time in a while, and analysts are beginning to freak out.

As if that was not bad enough, it looks like the hype and hoopla surrounding Coinbase’s shares on the Nasdaq has died down as well. The popular cryptocurrency exchange has seen its stock fall by more than three percent in just the last day, with shares dropping to about $282 each at press time.

What could have happened to make all these falls occur so suddenly? Is it possible that perhaps the momentum surrounding both assets could have died down this quick? Are people now not interested in these assets and looking for new items to trade? Or is the regular economy tightening up now that stores are opening and the incessant lockdowns are coming to an end, thereby leading to a dip in the crypto space which tends to thrive on economic chaos?

Right now, there appear to many factors playing into the slides. One is that Turkey is considering a ban of all cryptocurrencies. Another is that the bitcoin mining sector continues to garner hate and negative attention given all the energy it supposedly uses. This has been a focal point for the last few months given that increases in bitcoin’s price usually means that it becomes more expensive to mine.

According to a report issued by the International Energy Agency (IEA) in Paris, France, the demand for energy is likely to increase by nearly five percent by the end of this year alone. The document explains:

Demand for all fossil fuels is set to grow significantly in 2021. Coal demand alone is projected to increase by 60 percent more than all renewables combined, underpinning a rise in emissions of almost five percent or 1,500 metric tons. This expected increase would reverse 80 percent of the drop in 2020, with emissions ending up just 1.2 percent (or 400 metric tons) below 2019 emissions levels.

The Futures Market Is Stalling

Nikolaos Panigirtzoglou of JPMorgan Chase believes that long positions in BTC futures may be preventing bitcoin from experiencing more bullish behavior. He states:

Over the past few days, bitcoin futures markets experienced a steep liquidation in a similar fashion to the middle of last February, middle of last January or the end of last November.