With fresh data showing that American employers added jobs at a decent but unexceptional pace in May, President Biden on Friday emphasized that his administration would not try to extend enhanced unemployment benefits that Republicans have criticized as a key factor in fueling a labor shortage.

The extent to which the extra $300 in weekly jobless benefits may be keeping workers sidelined is unclear. Some economists say insufficient child care and health concerns may be the main drivers behind Americans not seeking jobs, while unemployment insurance and other pandemic-era policies are giving people the financial flexibility to choose to remain out of work.

But the pace of hiring has been somewhat disappointing in recent months, and business complaints about worker shortages abound. The U.S. added 559,000 jobs in May, a solid number but one that fell short of analyst expectations of 675,000 jobs. The prior month was a more significant miss: Just 278,000 jobs were added at a time when analysts were expecting a million.

The Biden administration on Friday celebrated the May job gains as a sign that the labor market is healing from the pandemic downturn and that its policies are working. But White House officials indicated they would not try to renew the enhanced jobless benefits, which expire in September, saying they were meant to be temporary.

At least 25 states have already moved to end the extra $300 beginning this month, a decision that Jen Psaki, the White House press secretary, said on Friday was completely within their purview. While the administration views the benefit as an “extra helping hand” for workers, some governors disagree and “that’s OK,” she said.

“Every governor is going to make their own decision,” she said.

The White House’s move to de-emphasize the benefit, which Democrats included in the $1.9 trillion economic relief bill that passed in March, risks angering progressives. But it could also help to shift the narrative toward the broader set of priorities the Biden administration hopes to pass in the months ahead, including a huge infrastructure plan.

“This is progress — historic progress,” Mr. Biden said. “Progress that’s pulling our economy out of the worst crisis it’s been in in 100 years.”

He added that the recovery was not going to be smooth — “we're going to hit some bumps along the way” — and that further support that bolsters the economy for the longer term was needed.

“Now’s the time to build on the foundation we’ve laid,” Mr. Biden said.

Payrolls are still 7.6 million jobs below their prepandemic level. Economic officials, including those at the Federal Reserve, had been hoping for a series of strong labor market reports this spring as vaccinations spread and the economy reopens more fully from state and local lockdowns that were meant to contain the pandemic. In April, Jerome H. Powell, the Fed chair, pointed approvingly to the March jobs report, which had shown payrolls picking up by nearly a million positions.

“We want to see a string of months like that,” he said.

Instead, gains have proceeded unevenly. Job openings are high and wages are rising, suggesting that at least part of the disconnect comes from labor shortages. That is surprising at a time when the unemployment rate is officially 5.8 percent, and even higher after accounting for people who have dropped out of the labor market during the pandemic.

Economists say many things could be driving the worker shortage — it takes time to reopen a large economy, and there is still a pandemic — but the trend has opened a line of attack for Republicans. They blame the enhanced unemployment benefits for discouraging people from returning to work and holding back what could be a faster recovery.

“Long-term unemployment is higher than when the pandemic started, and labor force participation mirrors the stagnant 1970s,” Representative Kevin Brady of Texas, the top Republican on the House Ways and Means Committee, said in a news release. “It’s time for President Biden to abandon his attack on American jobs, his tax increases, his anti-growth regulations and his obsession with more emergency spending and endless government checks.”

Republican governors across the country have in recent weeks moved to end the supplemental unemployment benefits that began under President Donald J. Trump. The idea is that doing so will prod would-be workers back into jobs. 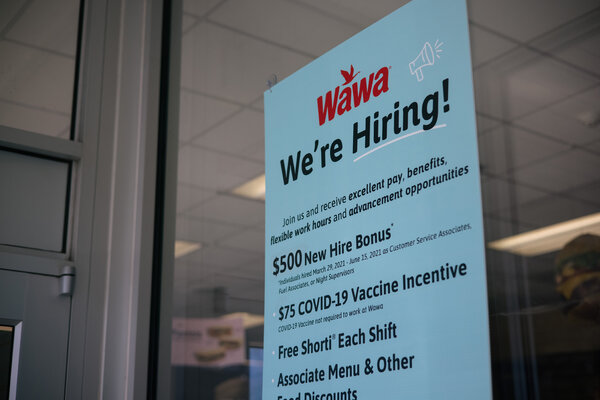 Many progressives disagree with that assessment. Democratic leaders in Congress cited the latest employment report as a sign that lawmakers should move to enact the rest of Mr. Biden’s plans to invest in roads, water pipes, low-emission energy deployment, home health care, paid leave and a variety of other infrastructure and social programs — but also that the government should continue to support workers who remain on the sidelines.

“The American people need all the support they can get, especially Black and Hispanic communities that were among the hardest hit by the pandemic,” Representative Donald S. Beyer Jr., Democrat of Virginia and the chairman of Congress’s Joint Economic Committee, said in a news release, urging lawmakers to “step up.”

Fed officials, who are in charge of setting the stage for full employment and stable prices by guiding the cost of borrowing money, are likely to interpret the May report cautiously. The acceleration in job growth was good news, but the report also offered clear evidence that the labor market remains far from healed.

“I view it as a solid employment report,” Loretta J. Mester, president of the Federal Reserve Bank of Cleveland, said on CNBC following the release. “But I’d like to see further progress.”

The central bank is buying $120 billion in bonds each month and holding its main policy interest rate at near-zero, policies that keep borrowing cheap and help to stoke demand. Fed officials have said they would need to see “substantial” further progress toward their two goals — maximum employment and stable inflation — before beginning to remove monetary support by scaling down their bond buying program.

Ms. Mester made clear that the May report did not reach that standard.

“I would like to see a little bit more on the labor market to really see that we’re on track,” she said.

Officials have an even higher hurdle for lifting interest rates: They want to see a return to full employment and signs that inflation is likely to stay above 2 percent for some time.

Inflation has been moving higher this year, but Fed officials have said they expect much of the pop in prices to be temporary, caused by data quirks and a temporary mismatch as the economy reopens and demand outpaces supply.

While the Fed is primarily in charge of controlling inflation, the Biden administration has also been reviewing supply chain issues and hoping to address some of them.

Brian Deese, the director of the White House’s National Economic Council, said the administration had identified concrete steps and a long-term strategy to make supply chains for things like semiconductors more resilient. In other areas, like housing materials, the solution may involve convening private-sector actors to figure out a possible strategy.

Ms. Psaki said the White House would talk about their plans “when we have more details to share, and hopefully that will be next week.”