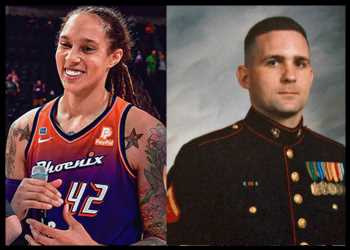 The Biden administration says it has made a “substantial offer” to secure the release of two Americans who have been detained by Russia.

CNN reported that Washington has offered to release convicted Russian arms trafficker Viktor Bout in exchange for Paul Whelan and Brittney Griner, but the White House and the Department of State refused to reveal details of the proposed deal.

Dubbed the merchant of death, Viktor Bout is an arms dealer currently serving a 25-year jail term on charges of arming a Colombian rebel group to kill Americans.

He has been dubbed the “most dangerous man on the face of the Earth.”

At a news conference Wednesday, US secretary of state Antony Blinken said that in the coming days, he expects to speak with Russian Foreign Minister Sergei Lavrov for the first time since the war against Ukraine began.

“I plan to raise an issue that’s a top priority for us: the release of Americans Paul Whelan and Brittney Griner, who have been wrongfully detained and must be allowed to come home. We put a substantial proposal on the table weeks ago to facilitate their release. Our governments have communicated repeatedly and directly on that proposal. And I’ll use the conversation to follow up personally and, I hope, move us toward a resolution,” he told reporters.

When asked if this substantial proposal involves a swap of detainees as was done in the case of Trevor Reed, Blinken said because he wants to make sure that the proposal that the Satate Department put forward has a good chance to advance, he is not going to get into it in public.

But Blinken added, “We’ve demonstrated with Trevor Reed – came home a few months ago – that the President is prepared to make tough decisions if it means the safe return of Americans”.

A U.S. Marine Corps veteran who was arrested in Russia in 2019, Reed was released back to the United States On April 27 as part of a prisoner exchange for Konstantin Yaroshenko, a Russian pilot convicted of drug smuggling.

Replying to another question, Blinken confirmed that President Joe Biden is directly involved role in putting that offer to the Russians. “He was not only directly involved, he signs off on any proposal that we make,” he told reporters.

At a separate press briefing, NSC Coordinator for Strategic Communications John Kirby declined to talk about the details of the negotiations and the proposal that the U.S. Government made to the Russians.

Kirby said this offer was made several weeks ago, and that the U.S. side certainly hopes that Russia will favorably engage on it.

He told reporters that officials from the U.S. Embassy in Moscow attended the sixth session of the court hearing of Brittney Griner, the WNBA star who has been detained in Russia on drug charges since February.

Paul Whelan, a former U.S. marine, was arrested in Russia in 2018, and accused of spying. He received a 16-year prison sentence with the possibility of time in a labor camp.