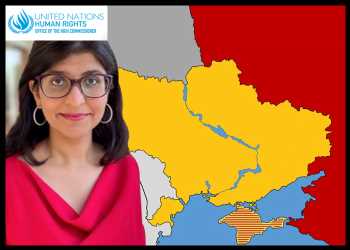 The United Nations human rights wing has warned that Russia and affiliated groups could be planning trials for Ukrainian prisoners of war.

“We are concerned by reports that the Russian Federation and affiliated armed groups in Donetsk are planning – possibly in the coming days – to try Ukrainian prisoners of war in what is being labelled an ‘international tribunal’ in Mariupol,” Spokesperson for the UN High Commissioner for Human Rights Ravina Shamdasani said in a press briefing on Tuesday.

She told reporters that while only few details of the planned trials are available, photos and video footage published in the media and on social media appears to show that metal cages are being built in the philharmonic hall, apparently to restrain prisoners of war during proceedings.

Under international law, individuals entitled to prisoner-of-war status have combatant immunity and cannot be prosecuted for having participated in hostilities, or for lawful acts of war committed in the course of the armed conflict, even if such acts would otherwise constitute an offence under domestic law.

If prisoners of war are charged with crimes, they are entitled to due process and fair trial guarantees. No sentence or punishment may be passed on them unless it is delivered by an impartial and regularly constituted court.

The UN human rights agency pointed out that international humanitarian law prohibits the establishment of courts solely to judge prisoners of war and that willfully depriving a prisoner of war of the rights of fair and regular trial amounts to a war crime.

Ravina Shamdasani called on the Russian government to grant independent monitors full access to all individuals detained in relation to the armed conflict in Ukraine, by the Russian forces as well as Russian-affiliated armed groups.

Earlier this month, Mariupol mayor Vadym Boichenko had said that the Russian forces are turning the city’s famous cultural center into a place of trial for our prisoners of war and civilians.