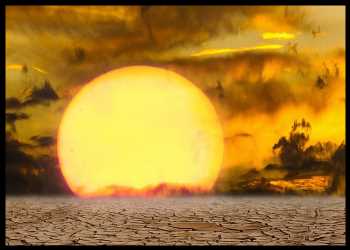 As the scorching heatwave in Europe moves northward, Britain is braced for its hottest day on record on Tuesday.

After the country experienced the warmest night on record overnight, the daytime temperatures were expected to reach up to 42C, far above the UK all-time high of 38.7C set in 2019.

Wales experienced its hottest day on record with 37.1C Monday.

The U.K. Met Office issued the first ever Red warning for extreme heat, saying, “Exceptional heat is expected to affect a large part of England with temperatures likely in the high 30s C in some places and perhaps even exceeding 40°C.”

An Amber Extreme heat warning is also in place for much of England and Wales and southern Scotland until the end of Tuesday.

As a result of temperatures continuing to climb, a number of schools were closed, rail services were affected, and faintings were reported due to heat exposure.

Temperatures are expected to start returning to normal from the middle of next week onwards as cooler air pushes across the country from the west, according to the Met Office.

Meanwhile, NASA published a map measuring the surface air temperatures across most of the Eastern Hemisphere.

“This large area of extreme (and record breaking) heat is another clear indicator that emissions of greenhouse gases by human activity are causing weather extremes that impact our living conditions,” said Steven Pawson, chief of the Global Modeling and Assimilation Office at NASA Goddard Space Flight Center.

In Western Europe, which was already experiencing severe drought, the heatwave fueled fires that raged across Portugal, Spain, Greece and France. In Portugal, temperatures reached 45 degrees Celsius in the town of Leiria, where more than 3,000 hectares of vegetation had burned. More than half of the country was on red alert as firefighters battled several active fires.

Temperatures are also forecast to rise above 35C in the Netherlands and cross 40C in neighboring Belgium as wildfires continue to rage in southern parts of the continent.