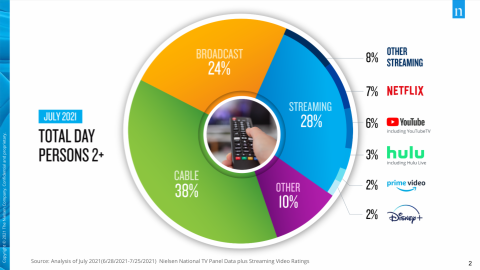 The Tokyo Olympics turned in a muted performance in the ratings overall, but they were enough to lift broadcast TV’s share of total viewing in July, according to Nielsen’s latest edition of The Gauge.

The monthly snapshot found that broadcast was at 24% of all viewing, up 1% from June, but streaming commanded 28%. While that’s less than cable TV’s 36% share, streaming has gained 1% in each monthly installment of The Gauge since it launched with a look at the month of May.

“Sports also likely impacted streaming’s share. This includes many of the Olympics highlights clips, which were posted on YouTube, where we saw some minutes increase,” said Brian Fuhrer, SVP of product strategy at Nielsen. “We’ll stay tuned for next month when we’ll have the full impact of the Games to review.”

Within streaming, subscription services are the main draw, accounting for more than half of all minutes viewed. Ad-supported video on demand (AVOD) has grown to more than one-third of the total.

Netflix was the top service, accounting for 7% of viewing. YouTube was next at 6%, followed by Hulu at 3% and Disney+ and Amazon Prime Video with 2% apiece.

Among viewers aged 2 to 17, not surprisingly, Disney+ has the top share, though Nielsen did not break out that exact number.

In AVOD, Nielsen has gathered some noteworthy data on various audiences’ viewing habits. Black audiences in June accounted for 24% of all minutes viewed across all AVOD services. Fox Corp.’s Tubi has the biggest share of Black audiences: they watched 39% of the total minutes viewed on Tubi in June, compared with their 17% portion of linear TV. ViacomCBS-owned Pluto TV also draws a sizable Black audience, with 36% of the platform’s viewed minutes in June.