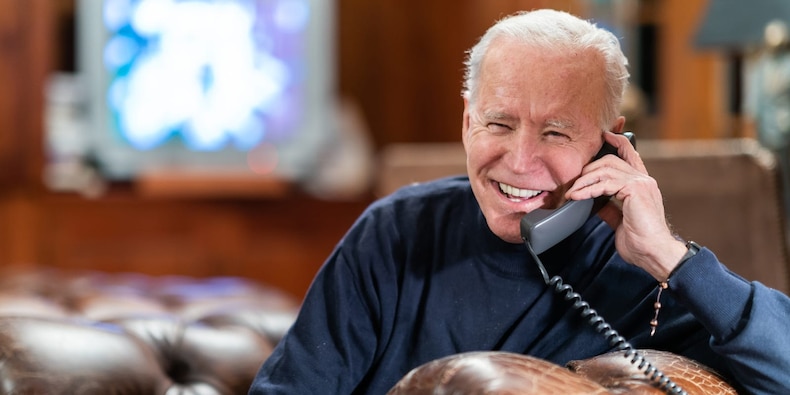 The US stock market has seen better returns in Joe Biden's first 100 days as President than under any previous president in the last 75 years, according to data from JPMorgan.

In a note to clients on Friday, JPMorgan analysts led by John Normand reviewed the Biden administration's performance since inauguration day and discussed how upcoming tax policies and spending programs could move markets in the coming months.

"Not bad for someone Trump labeled as Sleepy Joe during the campaign," the analysts wrote.

S&P 500 returns for the first 100 days during Biden's presidency were nearly 25% compared to returns of just below 15% for the index during Trump's first 100 days.

Data from JPMorgan shows Democratic Presidents' average S&P 500 return is more than double the average return of Republicans' presidents since the end of World War II.

The previous high watermark for 100-day success was set by President John F. Kennedy who oversaw equity returns of more than 20% in his first 100 days in office. 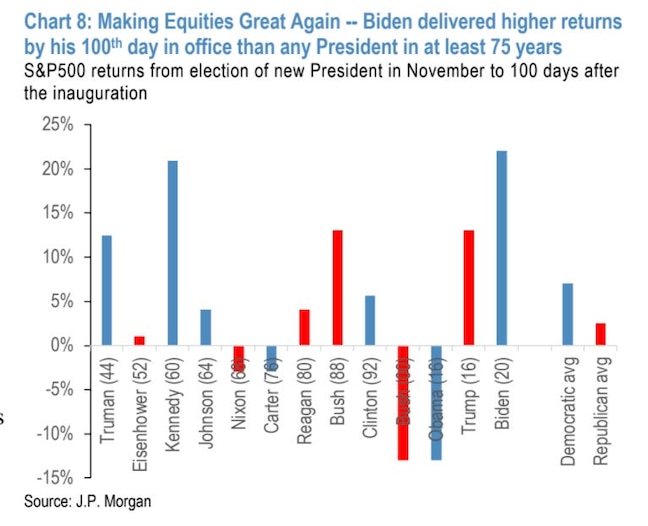 JPMorgan said in their note that while Biden's policies since the inauguration have benefitted the market, upcoming policies are "no longer so unambiguously positive."

Biden has announced plans to nearly double the capital gains tax rate to as high as 43.4% for wealthy Americans.

The JPMorgan team said that tax hikes on corporations and individuals to fund infrastructure and social spending coupled with a tightening regulatory environment could be a drag on equities in 2021.

That being said, the team doesn't believe tax increases will drive a big dip in earnings.

"The view since the 2020 campaign has been that a higher corporate rate would lower S&P 500 EPS by several dollars," the analysts wrote. "But within a surging earnings growth environment driven by greater fiscal outlays and vaccine-driven reopening, our US Equity Strategists have refreshed and expanded that original analysis this week, with no change to the year-end S&P target of 4400."

Read more: UBS picks 13 stocks poised to profit for years to come from the return to retail as the economy recovers and consumers start spending again

However, JPMorgan analysts pointed out that this is a small sample size, and the 1986 Tax Reform Act came alongside lower corporate and individual rates.

Overall, the group said they expect Biden's tax policies to drive a continued rotation into value stocks and away from big tech and growth names, instead of a market downturn.

JPMorgan's view is backed up by UBS Global Wealth Management, who told clients in a note last week that they have found "no correlation between capital gains tax rates and equity market valuations."