The light bar across the front of the Chevrolet Blazer EV will change color and pulse with waves of light as the vehicle is charging.

(CNN)General Motors revealed a new electric mid-sized SUV, the Chevrolet Blazer EV, that will go on sale in about a year. Part of GM’s push to go all-electric in a little over a decade, the Blazer EV will join an increasingly competitive market for electric SUVs. But its real appeal may be in just how many different ways it can be ordered, showing how car companies can exploit the flexible packaging of electric motors to meet wildly different needs.

While GM already offers the Chevrolet Bolt EUV, a small crossover SUV, the Blazer is a much better-known name, and mid-sized crossovers are one of the most popular vehicle types in America. While it shares no components with the gas-powered Blazer SUV, the EV has a similar sort of Camaro-inspired performance-car aesthetic both inside and out. (The general resemblance is to the current Blazer crossover, which will remain on sale alongside the EV, not to the classic full-sized Blazer SUV.)
The Blazer EV will be offered in a high-performance Blazer SS version with all-wheel-drive provided by two electric motors producing up to 557 horsepower. With prices starting at about $66,000, it will be the most expensive version of the SUV, and it will have special design features like a contrasting-color roof. Prices for base versions with front-wheel-drive will start about $48,000 when the SUV goes on sale in the summer of 2023. 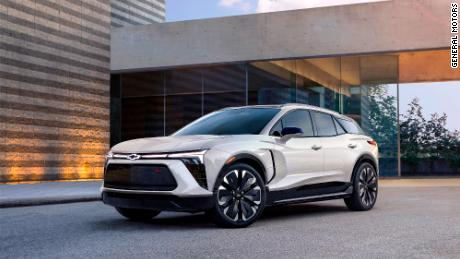 It will compete against the Ford Mustang Mach-E, but with more available horsepower at slightly higher prices. The Blazer also seems like it might be a generally more practical SUV than the slope-backed Mustang, which would seem to have a more constrained rear cargo space. (GM has not yet released cargo space measurements for the Blazer EV, but the vehicle appears to have more cargo space behind the back seats.) Unlike the Mustang, though, the Blazer doesn’t have a front trunk, or “frunk.” GM engineers explained that they felt it was better to use space under the hood for the front motor and bulky electronic equipment, leaving as much space as possible in the rest of the vehicle.

The Blazer EV’s front end features a horizontal light bar and a Chevrolet bow-tie logo that also lights up. Ordinarily, the light is white, but, when the SUV is charging, the color changes to light blue and the light pulsates and waves.

Inside, the Blazer EV has no start button. Like Teslas and some other EVs, the vehicle is turned on and is ready to drive as soon as the driver sits in the front seat and presses the brake pedal. Likewise, it turns off once the driver gets out of the vehicle and closes the door.
The Blazer EV’s electronic gauge screen and the larger central touchscreen next to it are combined in a design that’s similar to that in some Cadillac models like the Escalade. The right side of the touchscreen curves in toward the driver making it easier to reach. The more expensive RS and SS versions will be available with two-tone interior colors and they will have flat-bottomed steering wheels similar to those in performance cars. 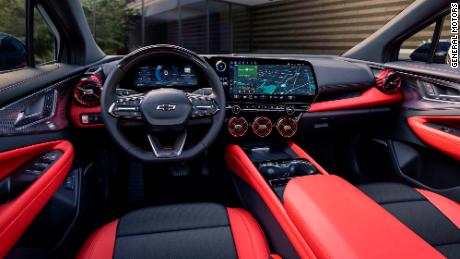 The Blazer EV will also be offered in rear-wheel-drive versions. It’s practically unheard of for one vehicle model to be offered in front-, rear- and all-wheel-drive versions, as the mechanical complexity and bulk of internal combustion engines and transmissions and their related intake and exhaust make it untenable. But the simplicity and compactness of electric motors makes it possible. Since EVs generally rely on separate motors to drive the front and rear wheels, it’s simply a question of marketing, rather than an engineering challenge, for an automaker to decide whether to offer two-wheel-drive versions with front- or rear-wheel drive. In this case, GM decided to simply offer customers all the options. Customers who don’t need all-wheel-drive but want a sporty driving feel can get rear-wheel-drive. Those who want more efficiency as well as security on wet or snowy roads, without all-wheel-drive, can get a front-wheel-drive Blazer.
With different battery pack options, the Blazer EV will be able to drive as far as 320 miles on a single charge or, in the least expensive versions, 247 miles. High-performance SS versions, with large battery packs but more emphasis on performance than on efficiency, will drive up to an estimated 290 miles on a charge.
GM is also working on a special Police Pursuit version of the Blazer EV based on the Blazer SS. That version, which will be made available only to police departments, will have, among other things, changes to the interior allowing for the installation of special computer equipment used by police officers.

GM has said it plans to sell nothing but electric- and hydrogen-fueled vehicles by 2035. It recently started selling the GMC Hummer EV electric truck, and the Cadillac Lyriq electric luxury SUV just recently entered production, as well. The Chevrolet Silverado EV electric pickup is expected to go on sale shortly before the Blazer EV.
The Blazer EV will soon be joined by the Chevrolet Equinox EV, which GM plans to unveil in September. As with the gas-powered versions, the Equinox EV will be slightly smaller and less expensive than the Blazer EV. GM has said that prices for that SUV will start at about $30,000.
Source: Read Full Article