The Coinbase IPO is a watershed moment for the industry that will suck in big-name investors, says Crypto.com CEO | Currency News | Financial and Business News 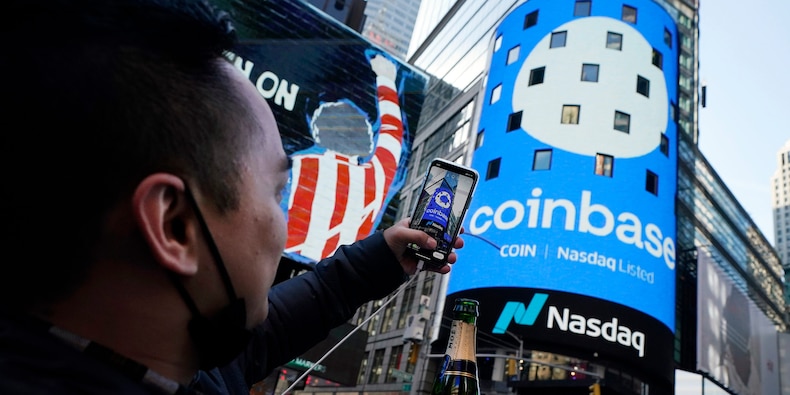 Coinbase's $100 billion stock market debut is a watershed moment for the cryptocurrency industry that will fuel a boom in investment, crypto exchange chief executive Kris Marszalek has said.

The head of the Crypto.com exchange told Insider that the direct listing "immediately reprices all the companies and all the deals in this space." He added that it was "extremely positive news for the whole industry."

Yet, Marszalek said Coinbase still faced some challenges, the main being the volatility of bitcoin and other cryptocurrencies and their resulting trading revenues. Exchanges need to add new lines of business to tackle this problem, he said.

Coinbase, the US's biggest cryptocurrency exchange, listed directly onto the Nasdaq exchange on Wednesday. Its valuation at one point shot above $100 billion but it closed at around $65 billion.

Crypto-enthusiasts and traditional investors alike were captivated. Many commentators hailed the listing as a coming-of-age moment for cryptocurrencies.

Edward Moya, senior market analyst at Oanda, said on Wednesday: "Bitcoin has survived years of skepticism and today's Coinbase debut is an exclamation point that cryptocurrencies are here to stay."

Marszalek's Crypto.com exchange is a smaller but sizable rival to Coinbase, with just over 10 million users compared to Coinbase's 56 million. He said the listing was a huge boost to the industry in general, in part because of the buzz it generated.

"It was so broadly covered… it was unavoidable," he said. "And this will result in further allocations to the space by institutions."

Institutional interest has been a major driver of the soaring bitcoin price in 2021. Big-name banks JPMorgan, BNY Mellon and Morgan Stanley are getting involved. And firms are queueing up to launch the first US bitcoin ETF, should regulators allow them.

Coinbase, ticker COIN, is now one more way for people to get exposure to bitcoin and crypto, Marszalek said. "I expect a little bit of a cool-down after such a seminal event, but it's not going to [last] long."

But the Crypto.com boss said the most positive effects would come from the spotlight the IPO shined on the industry.

"It attracted a lot of attention and what it does is it immediately reprices all the companies and all the deals in this space, regardless of the [fundraising] stage [they're at]. All these deals are suddenly repriced in this new reality.

"Fundamentally, it will result in more capital flowing into crypto companies. And that means more resources at their disposal to hire more engineering talent, bring in more people, innovate more, just basically drive this industry forward."

Yet, Marszalek said the volatility of cryptocurrencies is a problem for exchanges, and is something Coinbase needs to address.

With 96% of Coinbase's revenue coming from transaction fees on trading, the danger is that a sharp fall in bitcoin and other currencies could badly hurt the company's quarterly results.

Coinbase is well aware of this, with CEO Brian Armstrong saying on Wednesday that the company will diversify away from transaction fees over the next 5 to 10 years, by developing products like crypto cards.

Marszalek, whose company has a Visa crypto card and recently launched a NFT marketplace, said: "The question is who is going to be able to build a robust business that doesn't just stand on one leg."

He added: "We will see who manages to do it over the next couple of years, it's going to be a fun thing to watch."