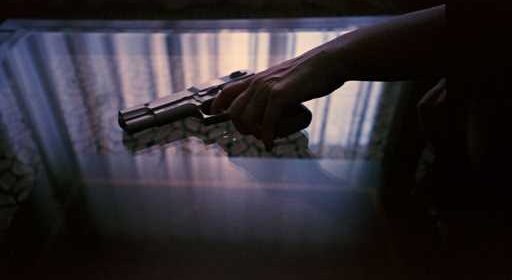 A new study from USC has found that guns are “ubiquitous” in scripted TV dramas, while depictions of gun safety are “rare.” Of 250 episodes sampled, the report found that one-in-three showed at least one person being shot, and that the victims were “disproportionally” white. About six in 10 episodes surveyed included gun-related content, but “fewer than 10% of episodes with such content included depictions of secure gun storage or discussions related to gun laws or origins.”

The study, from the USC Annenberg Norman Lear Center’s Media Impact Project, includes an “experimental study” of viewer responses, finding that “accurate” depictions of gun safety can have a “positive impact” on viewers, including greater awareness of gun safety, gun laws, and the safe storage of weapons. “Heavy-handed” storylines, however, were found to turn off gun owners “who feel their freedoms are being threatened, or their beliefs mocked.”

The report also makes recommendations to content creators to “accurately represent gun safety and prevention” – one of which is to “avoid portraying law enforcement use-of-force as heroic.” Another is to include discussions of gun safety and common-sense gun laws on their shows.

The study, which received support from the Everytown for Gun Safety Support Fund, examined 250 episodes from 33 scripted TV dramas over two seasons to gauge their depictions of gun safety practices, “common myths” about guns; discussions of gun laws; characteristics of those holding firearms, and the demographics of shooting victims.

And while most victims of gun violence on TV are white, in real life, the report says, “Young Black men are 20 times more likely to be killed by a gun than young white men. This inaccurate representation of gun casualties masks and distorts the ways in which shootings by law enforcement disproportionately affect communities of color. In reality, this violence is far from colorblind; Black Americans are three times more likely to be killed at the hands of law enforcement.”

The report also found that “common myths” about gun violence – perpetrators as mentally ill or the civilian “good guy with a gun” intervening in an active shooting – were rare on the shows examined.

Shannon Watts, founder of Moms Demand Action, which is part of Everytown for Gun Safety’s grassroots efforts, told Deadline that “It’s clear from the report that television storylines have the power to change hearts and minds and behavior, and this new report also shows that there’s more work to be done to make sure gun safety measures are portrayed accurately and that depictions of gun violence really capture the full scope of our nation’s gun violence crisis.

“The report definitely shows that the television industry has the power to help educate the public about the importance of gun safety, and that is something that should be taken into consideration when people in the entertainment industry are coming up with storylines about guns.”

Looking at seasons 2019-20 and 2020-21, the study identified 25 popular, scripted drama series in each season. Under the study’s methodology, 17of those series were included in both seasons, for a total of 33 unique series. Five episodes from each season of each series were randomly selected, giving a total of 250 episodes. Sixteen USC student research assistants were trained to code the episodes for the presence of gun-related content. The findings were largely consistent across both years.

“Guns were everywhere in popular scripted dramas, and particularly in shows focused on law enforcement,” the report found. “Around six in ten episodes (58% in the first season and 62% in the second) included gun-related content. Of these, the majority (55%, 65%) were from police shows, which represented 36% of the sample. Season 1 had a total of 351 different gun-carrying characters (an average of five per episode), and season 2 had 406 (5.4 on average). Nearly one in three episodes (30%, 29%) portrayed at least one character discharging a firearm.” 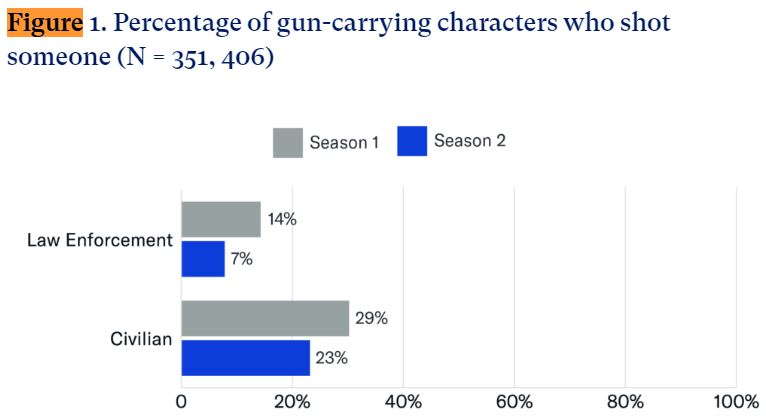 The study, “Shooting Straight: What TV Stories Tell Us About Gun Safety, How These Depictions Affect Audiences, and How We Can Do Better,” was authored by Soraya Giaccardi, M.S.; Shawn Van Valkenburgh, Ph.D.; Erica L. Rosenthal, Ph.D., and Erica Watson-Currie, Ph.D.

“The majority of gun content appears in police shows in which law enforcement officers are the protagonists. Indeed, most of the characters with guns are police officers,” the report says. “Law enforcement officers are generally portrayed as sympathetic and at least partially justified in their use of lethal force. These findings are consistent with the Lear Center’s 2020 research in collaboration with Color of Change, which found that ‘good guy’ law enforcement characters – often people of color – frequently act as implicit endorsers of a variety of wrongful police actions. This trope may give audiences the impression that any actions by law enforcement, up to and including shooting civilians, are inherently justifiable.”

On average, 110 people are killed by guns every day in the United States, “with Black Americans disproportionately impacted,” the report says. “Between 2019 and 2020, deaths by guns increased by 39.5% among Black people. In 2021, for the first time, the director of the Centers for Disease Control and Prevention declared gun violence a ‘serious public threat.’”

The report also found that “although portrayals of gun safety and prevention are rare, when they do appear, they can have a substantial impact on viewers’ knowledge, attitudes, and support for what Everytown refers to as common-sense gun laws. A storyline about a child shooting a playmate with an improperly stored gun led viewers to feel less safe with a firearm at home and made them more likely to endorse the importance of storing guns and ammunition separately. A second storyline about children traumatized by an active shooter drill caused such tactics to be perceived as less effective and more emotionally harmful. This storyline also motivated increased support for policies regulating the use of these training techniques in schools, particularly those with any form of simulated violence.”

According to the report, “Firearms are the leading cause of death among children and teens, increasing by 29% from 2019 to 2020 alone. School shootings receive disproportionate media and policy attention and are a major source of fear, but 85% of child victims of gun homicide die in their homes, and over 80% of child gun suicides involve a gun owned by a family member. In addition, myths persist, such as the belief that gun violence is primarily caused by mental illness, or that a civilian ‘good guy’ can intervene in an active shooting and save lives if they are allowed to carry a loaded gun.”

“The prevalence and impact of gun violence in entertainment media has been the subject of extensive research,” the report notes. “Little is known, however, about how often gun safety and prevention measures are portrayed or discussed, in what contexts, or the impact of such portrayals on audiences.”

The study also found that accurate depictions of gun safety can shape viewers’ views. To that end the report conducted an “experimental study” to examine the impact of gun depictions on audiences, recruiting 3,358 American adults, including parents and gun owners, who were randomly assigned to watch a clip from one of two gun safety-related storylines from Grey’s Anatomy and New Amsterdam, or a control storyline from Chicago Med that was unrelated to guns.
According to the study, viewing the Grey’s Anatomy storyline, which addressed an unintentional shooting in the home involving an improperly stored gun, led to:
• Greater knowledge of gun safety facts.
• Greater agreement that having a gun at home would make them feel less safe, but only among non-gun-owning respondents.
• A stronger belief that storing guns and ammunition separately was important, but only if there were children in the hypothetical household.

Viewing the New Amsterdam storyline, which focused on a student’s trauma following an active shooter drill with simulated violence, led to:
• Increased support for drills without simulated violence (e.g., online training, tabletop exercises, lockdown drills), finding such approaches more effective and less emotionally harmful than approaches with simulated violence or having armed law enforcement officers providing security in schools. These preferences were particularly pronounced among those who did not own guns themselves;
• Increased support for policies outlawing active shooter drills with simulated gun violence in schools, as well as those requiring parental consent before any type of shooter drill, screening students for trauma after drills, and broader preventative policies; and
• Reduced support for policies requiring public schools to participate in some sort of active shooter training.

“The impact of the gun storylines was generally stronger among viewers who do not own guns,” the survey found. “This was due in part to the reactance these storylines –particularly Grey’s Anatomy – evoked among gun owners. This is unfortunate, given how rare TV storylines about secure gun storage are, and the fact that guns in the home, not schools, pose the biggest threat to children. Ultimately, however, it is not surprising that the Grey’s storyline prompted reactance among gun owners; it explicitly discussed the dangers of having firearms in households with children and featured one doctor confronting another about their gun ownership. While reactance dulled the impact of both storylines, they were still persuasive. We did not find any differences in impact between parents and non-parents, though viewers of the Grey’s storyline believed greater caution is warranted if there are children in the hypothetical home.”

Based on their research findings, the authors of the study propose the following recommendations for content creators and other storytellers to “more accurately represent” gun safety and prevention:

1. Avoid portraying law enforcement use-of-force as heroic. Color of Change has advocated for — and had some success with — reducing the number of police shows on the air.32 Beyond canceling police dramas, content creators can complicate the narrative around use-of-force by avoiding portraying such actions as heroic and unproblematic. Consider showing law enforcement characters facing consequences, or at least scrutiny for such actions, which are rarely depicted.33
2. Humanize and diversify depictions of those affected by gun violence. Nuanced depictions of shooting victims can make audiences care about gun violence as a public issue. These depictions can be broadened to include the effects on those who survive, as well as witnesses and the loved-ones of those lost. Consider that calling attention to the very real racial disparities in gun violence is a delicate balance. “Colorblind” depictions of victims may give audiences the impression that such disparities do not exist, but at the same time, constant media images of dead Black and brown men can be retraumatizing to members of these communities.
3. Include discussions of gun safety and common-sense gun laws. Gun violence, including shootouts between cops and criminals, is overplayed on TV. Gun safety represents a largely untapped story opportunity. When told, these stories can change hearts and minds and even shift policy support. If they choose to depict or discuss a school shooting, content creators might consider explicitly drawing a connection to unsafe storage or gun laws in the show’s geographic setting.
4. Appeal to common values. Heavy-handed stories can be alienating to gun owners who feel their freedoms are being threatened, or their beliefs mocked. Instead of making gun owners the antagonist, appeal to the common values shared by parents and others who care about keeping children safe.

SAG-AFTRA To Pursue Pay For Auditions Under Specific Circumstances

WB Discovery CEO David Zaslav On Rumored Merger Talks: “We Are Not For Sale”