Starbucks has 235,000 employees spread across nearly 9,000 US stores. None are current members of a union. But employees at three locations in Buffalo have been working to organize a union, named Starbucks Workers United, an independent affiliate of the Service Employees International Union.
Besides seeking better pay, the union supporters argue that organizing the workforce is the only way to have their voices heard about the way their stores are run, and to win some better wages for longtime coworkers, who often make only slightly more than new hires.

Starbucks says it offers many benefits that others in the industry do not, including health care coverage for part-time workers and college tuition reimbursement. Starbucks has implemented two wage increases in that past 18 months. The coffee chain says its average wage is more than $12 an hour, and more than half of its US employees earn more than $15 an hour. The company says it has the best retention rate in the industry.

Even though the Buffalo vote represents only 100 employees, Starbucks is taking the organizing effort very seriously, flooding the Western New York city with top executives, including former chairman and CEO Howard Schultz. The company is concerned that the organizing effort could spark others elsewhere. Employees at a Starbucks in Mesa, Arizona, as well as at three other Buffalo locations, have also filed to start the process for holding a vote there.

In a recent filing with the Securities and Exchange Commission, in a section where Starbucks lists risks to the company, the chain said that “if a significant portion of our employees were to become unionized, our labor costs could increase and our business could be negatively affected by other requirements and expectations that could increase our costs, change our employee culture, decrease our flexibility and disrupt our business.”
But Starbucks is also concerned about how its efforts to defeat the union could hurt its reputation. “Our responses to any union organizing efforts could negatively impact how our brand is perceived and have adverse effects on our business, including on our financial results,” Starbucks warned in the same filing.
Union supporters at the Buffalo Starbucks, many of whom are in their 20s, have complained about the mandatory meetings employees have attended with top executives, arguing that it is a form of intimidation. The company said it is simply trying to present its argument that the best way to improve working conditions is to not have a union acting between employees, who Starbucks refers to as “partners,” and management.
Starbucks is “continuously listening to improve the partner experience and treating each other with respect and dignity. And although we will never be perfect, together we will create our best path forward,” said CEO Kevin Johnson in a message to staff this week. 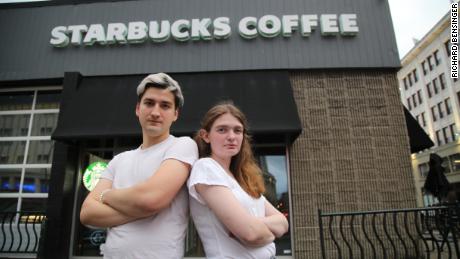 Starbucks has argued that the vote should be held among workers at all 20 stores in Buffalo, not just the three at which the union is trying to organize. The company said that’s because workers often move between stores, but the union said that argument was an effort to dilute the vote at the stores where it has the strongest support for unionizing.

“If we had petitioned for the whole district, they’d say the vote should be the whole state. If we petitioned for a vote for the whole state, they’d say the vote should be the whole nation,” said Richard Bensinger, an organizer for Starbucks Workers United and former national organizing director of the AFL-CIO.
The National Labor Relations Board, which is conducting the election, has ruled that the vote should be only at the three stores, but Starbucks is appealing the decision. It is possible that appeal could stop the votes from being counted Thursday and that the ballots could be impounded as the appeal is considered, but so far those appeals have failed. Assuming the process goes ahead as planned, counting is scheduled to begin at 1 pm ET.
Source: Read Full Article