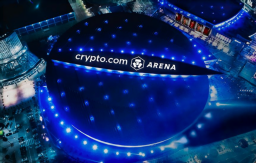 In what is said to be one of the biggest naming rights deals in U.S. history, Downtown L.A.’s Staples Center will become Crypto.com Arena, beginning Christmas Day. The deal between the Hong Kong-based cryptocurrency exchange and AEG is worth $700 million, according to multiple reports. As part of the deal, Crypto.com becomes “an official cryptocurrency platform partner of the Los Angeles Lakers and the L.A. Kings,” said a statement from the currency trader.

The deal becomes official on Christmas Day, which just happens to be the occasion of the NBA’s highest-profile regular season game, a nationally-televised contest between the Lakers and the Brooklyn Nets at the newly-christened L.A. arena. The new logo for the building and “premium branded areas of the arena including a 3,300 sq. ft activation space at the building’s entrance” are to be unveiled on Christmas Day. Given the artist’s rendering of the arena released by Crypto.com, one would assume the deal also includes the building’s iconic rooftop banner.

“This partnership represents the fastest-growing cryptocurrency platform and the biggest sports and live entertainment company in the world converging to drive the future of sports and live entertainment as well as the incredible legacy of this arena for decades to come,” said Todd Goldstein, Chief Revenue Officer of AEG. “It marks an exciting new chapter in the history of our company and our respective industries, and we couldn’t be more thrilled to have such a visionary partner like Crypto.com supporting our global fan base and local community.”

Crypto.com bills itself as “the first Official Cryptocurrency Sponsor and NFT Partner of UFC and F1…the first to partner with an NHL team (Montreal Canadiens), and the first to partner with a professional sports league (Lega Serie A).” It claims to have more than 10 million customers. The company was founded in 2016 and recently began a global campaign featuring Matt Damon to formally introduce the platform.

“We’re very excited about partnering with AEG and investing long term in this city, starting with Crypto.com Arena in the heart of downtown, and using our platform in new and creative ways so that cryptocurrency can power the future of world class sports, entertainment and technology for fans in LA and around the world,” said Crypto.com co-Founder and CEO, Kris Marszalek.

Staples center opened in 1999 and is home to the NBA’s Lakers and Los Angeles Clippers, the NHL’s Los Angeles Kings and WNBA’s Los Angeles Sparks. It is one of the nation’s leading concert venues and has been the site of 19 of the past 21 Grammy Awards. It cost $375 million to build.

The $700 million deal seems a good one for AEG, given it is nearly double that $375 million construction cost and the (for now) Staples Center is no longer the sole premium sports arena in town. Rams owner Stan Kronke recently opened the $5 billion SoFi Center in Inglewood. Nearby, Clippers owner Steve Ballmer recently broke ground on a multi-billion dollar arena for his team.