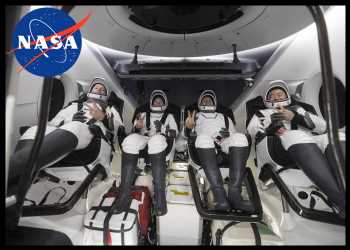 NASA’s SpaceX Crew-2 astronauts safely splashed down in the Gulf of Mexico off the coast of Florida on Monday aboard the Crew Dragon Endeavour spacecraft, completing the US space agency’s second long-duration commercial crew mission to the International Space Station.

The mission set a record for the longest spaceflight by a U.S.-crewed spacecraft.

US astronauts Shane Kimbrough and Megan McArthur, Japanese astronaut Akihiko Hoshide, and European astronaut Thomas Pesquet returned to Earth in a parachute-assisted splashdown at 10:33 p.m. EST off the coast of Pensacola, Florida. Crews aboard SpaceX recovery vessels successfully recovered the spacecraft and astronauts. After returning to shore, the astronauts will fly back to NASA’s Johnson Space Center in Houston.

“We’re happy to have Shane, Megan, Aki, and Thomas safely back on Earth after another successful, record-setting long-duration mission to the International Space Station,” said NASA administrator Bill Nelson. “Congratulations to the teams at NASA and SpaceX who worked so hard to ensure their successful splashdown. NASA’s Commercial Crew Program continues to demonstrate safe, reliable transportation to conduct important science and maintenance on the space station.”

The Crew-2 mission took off from NASA’s Kennedy Space Center in Florida on a Falcon 9 rocket, and docked to the space station on April 24.

The astronauts traveled 84,653,119 statute miles during their mission, stayed 198 days aboard the space station, and completed 3,194 orbits around Earth.

They studied how gaseous flames behave in microgravity, grew hatch green chiles in the station’s Plant Habitat Facility, installed free-flying robotic assistants, and even donned virtual reality goggles to test new methods of exercising in space. The astronauts took hundreds of pictures of Earth as part of the Crew Earth Observation investigation. It marked one of the longest-running investigations aboard the space station, which contributes to tracking of natural disasters and changes to the earth.

The fourth spacewalk, conducted by Hoshide and Pesquet on September 12, was the first in the history of the international space station that did not include an American or Russian, NASA said in a statement.

The Crew-2 flight is part of NASA’s Commercial Crew Program, which has worked with the U.S. aerospace industry to launch astronauts on American rockets and spacecraft from American soil to the space station.

NASA’s next batch of astronauts, the SpaceX Crew-3 mission, is scheduled to launch from the Kennedy Space Center in Florida at 9:03 p.m. EST Wednesday, for another long duration mission.