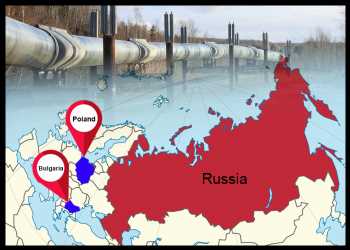 Russian has cut gas supplies to Poland and Bulgaria over their refusal to pay in rubles.

Russian energy giant Gazprom said it has turned off gas supplies to the two countries Wednesday morning, and that exports will not be restored until payments are made in the Russian currency.

“At the close of business on April 26, Gazprom Export did not receive payments for the supply of gas in April from Bulgaria and Poland in rubles. Gazprom has notified Bulgaria and Poland about suspending the supply of gas starting from April 27 until payments are made according to the order established by the decree,” the company said in a statement.

In a legislation introduced in March, Russian President Vladimir Putin had warned that “unfriendly” countries would need to pay for gas in rouble from April 1, or risk being cut off.

Although many European countries are heavily relying on gas from Russia, Hungary is the only country to offer to pay in rubles.

The EU is planning to slash the consumption of Russian natural gas this year as it prepares for a complete break with Russia, its single biggest energy supplier. But Europe would struggle to survive for long without Russian gas.

The European Commission president criticized the move saying Russia is using gas supplies to Europe as “instrument of blackmail.”

“Gazprom’s announcement is another attempt by Russia to blackmail us with gas. We are prepared for this scenario. We are mapping out our coordinated EU response,” European Commission President Ursula von der Leyen wrote on Twitter Wednesday.

“Europeans can trust that we stand united and in solidarity with the Member States impacted,” she added.

von der Leyen said an emergency meeting of the European Union’s gas coordination group will be held Wednesday to decide how to respond to the Russian action.

Bulgarian Energy Minister Alexander Nikolov said “(Russian) natural gas is being used more as a political and economic weapon in the current war.”

Meanwhile, Ukraine has acknowledged the loss of several towns and villages in the eastern Donbas region as Russia intensified its ground offensive.

Civilians are fleeing the southern city of Kherson, which is almost completely under the control of the Russian forces.