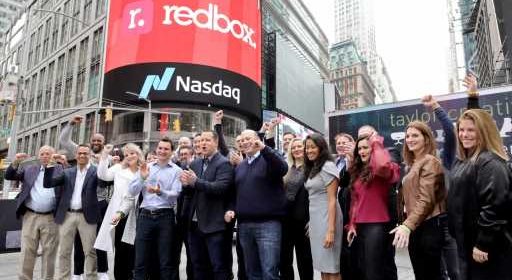 Redbox, originally a disc-dispensing network of kiosks developed by executives at McDonald’s, kicked off a new corporate chapter today by becoming a publicly traded company.

Its stock surged 24% during the trading session, touching a high of $14.44 before closing at $11.90. The public listing on the Nasdaq was created by a SPAC merger with Seaport Global Acquisition Corp., yielding an enterprise value of $590.3 million. Private equity firm Apollo Global Management, which took Redbox’s former parent company private in 2016, still owns 76.1% of the new entity.

Although it continues to operate some 40,000 red kiosks located at the high-traffic doors of retail stores, Redbox has also pushed into streaming as well as film production. It operates Redbox Free Live TV, an ad-supported service, as well as Redbox On Demand, which has free and transactional. Redbox Entertainment, which launched in 2019, has fostered a lineup of moderately budgeted genre movies made for broader consumption.

CEO Galen Smith told Deadline he had not been well-versed in the nitty-gritty of SPACs until the past year despite having held several finance-focused positions in his career. One of his early stints as a junior investment banker at Morgan Stanley, he recalled, involved working on approaches to a public offering for Redbox, which was founded in 2002. As to why Redbox chose the SPAC route, Smith said, “In a lot of ways it can be a lot faster and more efficient” than a more traditional IPO. Getting up to speed on SPACs, he said, was “a great learning experience.”

Smith said Redbox’s goal was to become a “one-stop entertainment shop.” Free Live TV has drawn 1 million monthly active users, according to the company. A recent agreement struck with Lionsgate will fill Redbox’s streaming cupboard with more titles and also give Redbox Entertainment originals distribution via the venerable indie.

So where exactly does Redbox fit into the media universe, especially now that it’s public? “What’s unique about Redbox is that most digital companies don’t make money,” Smith said. “It’s really hard to find a specific peer group for us because we cut across the legacy business and digital streaming.”

Embarking on this new public chapter puts the company’s occasionally fraught relationships with major media companies in a new light, Smith said. He said mending those fences is “one of the things that I’ve been most proud of” during his 12-year tenure as an exec at Redbox. As once-robust DVD revenues began a long-term swoon in the late-2000s and the company continued to offer deep disc discounts, Redbox came to be regarded with suspicion by many major studios. That led to epic legal clashes, with tensions continuing to manifest through November 2019, when it settled a case brought by Disney over digital download codes.

“It was a little challenging to get blamed or for them to determine that we were driving the decline in sell-through [disc sales], when it was a change in consumer behavior,” Smith said of studio relations. “We’ve been able to convince them over time. As they think about growing transactional business, we provide that last bastion of consumers who are buying through multiple channels.”

Chalking up the friction largely to a “misunderstanding,” Smith continues, “We’ve been able to very successfully change minds … We’ve made a ton of progress. A lot of them are my friends. I think we’ve gradually been able to help them see the upside to them in what we’re doing.”

Won’t Be “Bending To Anyone’s Demands” Over ‘Closer’; Praises Sarandos