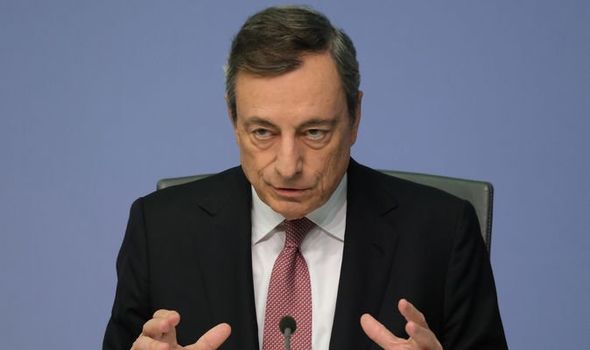 In a bid to stimulate the weakening Eurozone economy, the European Central Bank (ECB) finally announced its highly anticipated ‘significant’ stimulus package. The bank also cut its main deposit rate to a record low of -0.5 percent. In his last major announcement as ECB President, Mario Draghi said the decisions to cut rates and restart quantitative easing were taken in order to boost inflation and aid with the “persistence of prominent downside risks”.

Mr Draghi noted that while the probability of a recession in the Eurozone is increasing, the threat still remains “a small probability”, while the cloud hanging over the German economy is a different story.

Earlier today IFO warned of an imminent German recession, and when questioned about the risk, Mr Draghi described recession predictions as “a case for timely and effective action on the fiscal policy side”.

Despite the bank downgrading its growth forecasts for the bloc to 1.1 percent in 2019 and 1.2 percent in 2020, the euro has still managed to edge up against the pound.

Meanwhile, the ECB President’s comments on Brexit will leave Sterling under pressure. Mr Draghi said the likelihood of the UK crashing out of the European Union without a deal have increased: “[in] the case of a hard Brexit […] the probability of which has gone up over recent time.”

In other news, Prime Minister Boris Johnson has denied he lied to the Queen in the advice he proffered when requesting she approve a five-week prorogation of parliament.

This statement came after Scotland’s highest civil court ruled the suspension unlawful, leading to a widespread call for parliament to reconvene.

Looking ahead, any further Brexit developments and UK political fallout are certain to cause movement in the pound euro exchange rate.

Meanwhile, the Eurozone’s second quarter wage growth could provide an upswing of support for the single currency if the data shows growth hovering close to the almost decade-high Q1 level.

Businesses are Rapidly Embracing Blockchain to Fight Counterfeiting
We and our partners use cookies on this site to improve our service, perform analytics, personalize advertising, measure advertising performance, and remember website preferences.Ok