Reinforcing the economic recovery belief, gross personal income tax (inclusive of refunds) has posted a 2.5 per cent year-on-year growth during FY21, despite the Covid-triggered lockdown and other restrictions.

But corporation tax reported a 6 per cent fall YoY, pulling gross direct tax collection down by 2 per cent.

Due to record refunds, net direct tax collection was down close to 8 per cent at Rs 9.5 trillion, yet the overall figure exceeded the Revised Estimate (Rs 9.05 trillion) for the first time in four years.

These are only provisional numbers and the final data is yet to be collated.

“The economy has picked up faster than expected. The numbers are expected to see further surge once final numbers arrive,” said a government official.

On the other hand, corporation tax collection stood around Rs 6.4 trillion in FY21, against Rs 6.7 trillion in the previous year.

Net direct tax collection had been lower on account of the government’s resolve to issue timely refunds in view of the economic impact of the pandemic, the official said.

But the net figure exceeding the RE provided a significant buffer to the otherwise fiscally stressed Union government. 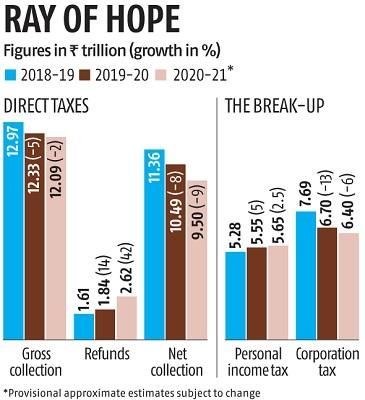 The Central Board of Direct Taxes had issued refunds of over Rs 2.62 trillion to more than 23.8 million taxpayers in FY21, against Rs 1.83 trillion in FY20.

‘It has been the endeavour of the government to come out with various measures to ease the economic fallout of the pandemic and in line with the same, the CBDT has issued pending refunds expeditiously,’ the government said in a statement.

In the Budget, presented in February, the direct tax collection target for FY21 saw a significant fall from Rs 13.19 trillion estimated earlier, in view of the economic impact of the pandemic.

Revenue Secretary Tarun Bajaj in an interview had said that the robust revenue mop-up would lead to slightly less fiscal deficit than 9.5 per cent of GDP as estimated in the Budget.

About 45 per cent direct tax revenue collection comes from advance tax, 35 per cent from tax deducted at source, and the remaining 20 per cent from self-assessment and recovery.

Payment on account of the Vivad se Vishwas — the government’s flagship tax dispute resolution scheme — will further add to the direct tax mop-up.

As much as Rs 54,346 crore had been earned while resolving tax disputes worth Rs 98,328 crore with taxpayers until March 1 under the scheme, which ended on March 31.