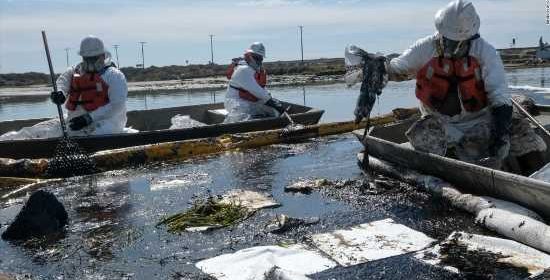 Los Angeles (CNN Business)The gridlock of massive container ships outside the United States’ two busiest ports in Southern California has been blamed for all types of things:

Now it may have been the cause of a major oil spill off the coast of Orange County, California.

As authorities scramble to contain the damage done by a broken underwater pipeline that has sent oil onto beaches and endangered wildlife, they are also investigating the possibility that the leak was caused by a ship’s anchor hitting the pipeline.

At a press conference Monday, Martyn Willsher, the CEO of Amplify Energy (AMPY), owner of the pipeline that dumped up to 144,000 gallons of oil into the ocean, said it was a “distinct possibility” that the damage was caused by a ship’s anchor.

On Tuesday, the Department of Transportation, which oversees pipeline accidents, notified Amplify that while “the root cause of the accident remains unconfirmed at this time,” that “preliminary reports indicate that the failure may have been caused by an anchor that hooked the pipeline, causing a partial tear.”
Authorities did confirm to the public Tuesday that divers had found a “4,000-foot section of the 17.7 mile-long pipeline was displaced with a maximum lateral movement of approximately 105 feet.”
“The pipeline has essentially been pulled like a bow string,” said Willsher.
When asked at a briefing Tuesday about speculation that a container ship’s anchor was the cause of the break, US Coast Guard Capt. Rebecca Ore said there is no confirmation of a vessel above the site of the spill, but the response team is working with other agencies in parallel investigation to determine whether a ship was in the area.
Officials said even with the congestion in the area the ships should have been able to avoid the pipeline. Ships should only drop anchor in designated areas and the pipelines are clearly indicated on nautical maps, said Coast Guard Petty Officer Steve Strohmaier.

What is clear is that the waters off the Ports of Los Angeles and Long Beach are clogged with an unprecedented number of container ships that have dropped their anchors as they wait to get into port, due to imbalance in the nation’s various supply chains that has come on with the prolonged pandemic.
The number of ships waiting to dock is fluctuating. As of late last week, when the accident appears to have happened, 64 container ships were waiting off the coast to get into berths at the Port of Los Angeles — the nation’s largest port — and its the neighboring Port of Long Beach, which is just behind it in cargo volume. That number had climbed to 76 ships by Monday, before slipping back to 62 on Tuesday.
It is now taking an average of 10 days for ships to get into the ports to unload and reload cargo containers. Before the pandemic, ships typically arrived and went straight to a berth at one of the two ports.
“It’s like taking 10 lanes of freeway traffic and moving them into five when the cargo gets here to the port,” Gene Seroka, executive director of the Port of Los Angeles, told CNN International on Tuesday. “We’re having difficulty absorbing all of that cargo into the American supply chain.” 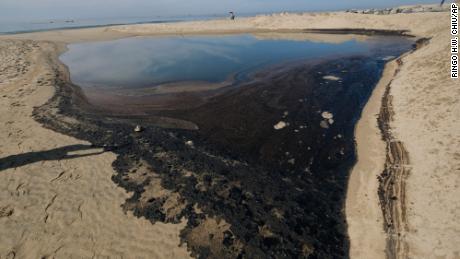 The problems are caused by a lack of truck drivers to haul away containers to the lack of workers at warehouses for which the goods are destined, and a lack of empty containers in the right parts of the world.
Consumer buying habits have also changed significantly during the pandemic, as they are spending less money on services and thus more money on goods that need to be physically moved.
“What you’re seeing is the American consumers’ buying power on display,” said Seroka.
The pipeline accident has the potential to release more oil into the ocean than any spill since the Deepwater Horizon disaster in 2010. California Gov. Gavin Newsom has declared a state of emergency.

Even if it turns out that a ship’s anchor was not the cause of the pipeline breakage and the resulting oil spill, the backup of ships and trucks at the ports is exacerbating the air quality in Southern California, according to experts.
A June report from the California Air Resources Board found that the backlog of ships waiting to dock causes “substantial implications for portside communities from increased particulate matter emissions, as well as contributions to smog-forming oxides.” And there were about 40 ships a day waiting to get into port back in June when the report was released. Now, more than 60 are waiting.
Source: Read Full Article