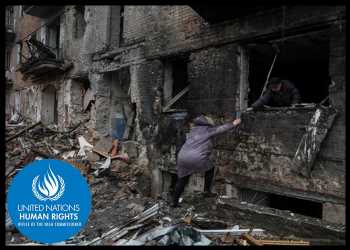 The situation in the southern Ukrainian cities of Mykolaiv and Kherson remains dire and critical due to the devastation caused by Russia’s relentless attacks against civilians and critical infrastructure across the region, the United Nations says.

Nearly a quarter of a million people in Mykolaiv are living without heat, water and power, UN Humanitarian Coordinator Denise Brown reported after visiting the two war-ravaged cities over the weekend.

The situation in Mykolaiv remains critical as the city continues to receive people fleeing Kherson – a trend that began when Russia first invaded Ukraine in February, UN Spokesperson Stéphane Dujarric quoted Brown as saying at a news briefing.

“Since the start of the war and until recently, Mykolaiv had been shelled almost daily, leaving some 250,000 people who remained in the city completely cut off from water supply and other essential services,” Dujarric told reporters.

Although electricity is gradually being restored, water and heating supplies remain dire.

“We continue to be concerned about the plight of civilians in Ukraine especially as winter sets in”, said Dujarric, adding that the UN is working to support people with services and supplies to make sure they can be protected and keep warm during these harsh months.

He thanked donors for their “extraordinary” financial support to the Ukraine humanitarian response, saying that $3.1 billion of the $4.3 billion Flash Appeal for the year had been received.

“In order to maintain the momentum of the response and continuity of operations to support people across Ukraine over these cold winter months, continued funding is obviously critical,” he said.

Brown saw first-hand how since Ukrainian the Government retook control of Kherson, supplies provided by the UN and partners have made a difference in the lives of people, the UN Spokesperson said.