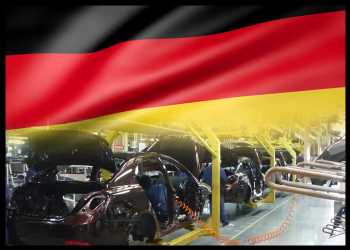 Germany’s factory orders declined notably in August largely due to the weak demand in the auto sector, data from Destatis revealed on Wednesday.

Factory orders fell 7.7 percent on a monthly basis, reversing a revised 4.9 percent rise in July. This was the biggest fall since April 2020. Orders were forecast to drop moderately by 2.1 percent.

Although the trend in orders sectors other than automobile continues to point upward, manufacturing is likely to remain a drag on the recovery of the German economy, Ralph Solveen, a Commerzbank economist said.

Domestic orders fell 5.2 percent and foreign orders plunged 9.5 percent on month in August. Within foreign demand, orders from the euro area grew 1.6 percent, while orders from other countries decreased 15.2 percent.

Producers of intermediate goods reported a fall of 2.8 percent in new orders. Demand for capital goods was down 11.1 and that for consumer goods by 2.7 percent.

Data showed that manufacturing turnover decreased 5.9 percent month-on-month, in contrast to the 1.9 percent increase in July.

Elsewhere, survey data from IHS Markit showed that the construction sector contracted in September as supply bottlenecks, capacity constraints and strong price pressures each continuing to act as headwinds to activity and new orders.