“At the U.S. Department of Labor, the company is recognized for its long history of violations and repeated failures to protect its workers from on-the-job hazards,” the agency said in a news release. “Dollar General continues to put workers at risk.”
Since 2016, the department’s Occupational Safety and Health Administration has proposed more than $3.3 million in penalties for safety violations at Dollar General locations around the country. These violations are typically for blocked electrical panels, obstructed exits as well as forklift, housekeeping and sanitation issues. 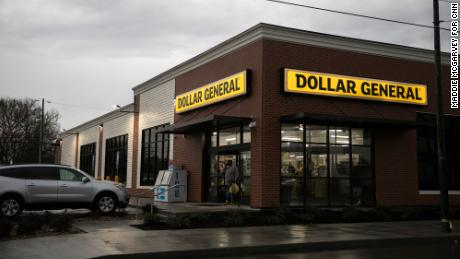 “Dollar General has a long history of disregarding safety measures to prevent serious injury or death in the event of a fire or other emergency,” Assistant Secretary for Occupational Safety and Health Doug Parker said in a statement. “This company’s troubled history of workplace safety violations must come to an end.”

In June, a federal inspection at a Dollar General in Mobile, Alabama, found the store “again failed to keep the main storeroom orderly” to allow workers to exit safely during an emergency. The store also exposed workers to slip and trip hazards and being struck by falling boxes.

OSHA proposed $321,827 in fines for the violations. Dollar General has 15 days to comply with the penalties from OSHA since the agency issued them December 8. It’s unclear whether Dollar General has paid the fines or if it is challenging them.
The company did not respond to a request for comment on OSHA’s allegations.
Dollar General (DG) is the fastest-growing retail chain in America, adding more stores every year than any other US retailer. The company currently operates around 18,000 stores and said it plans to nearly double that number.
The company has a low-cost, no-frills business model. It does not disclose how much it pays its workers, but industry analysts say it is among the lowest in retail. (Dollar General has said it provides “competitive wages and benefits.”)
Dollar General’s stores tend to be small and crowded, with high shelves and piles of boxes and carts lining the aisles. Sometimes, only one or two workers are on shift at a time.
Former executives, store employees, law enforcement officials and retail security experts told CNN Business last year that the company was failing to protect workers from violent crime. Its thinly-staffed stores and low-cost approach left workers vulnerable to robberies and other safety hazards, these sources said.

At least six Dollar General employees have died during armed robberies from 2016 to 2020, according to a review of news and police reports.
Dollar General’s stores are not unionized, but the company faced a union drive at one Connecticut store earlier this year. The workers voted against organizing.
Source: Read Full Article