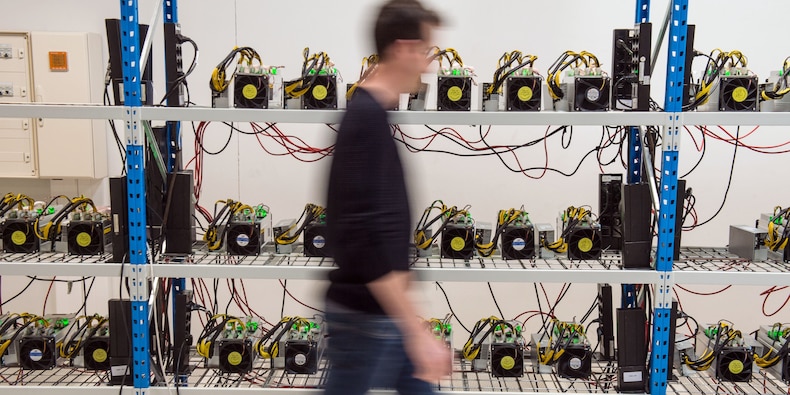 Crypto stocks were the worst-performing "basket" of assets in May as the price of bitcoin and other tokens plunged, according to Saxo Bank.

The Danish bank's bundle of crypto and blockchain theme stocks plummeted 18.1% in May, causing some serious pain for investors sucked in by 202 1's bitcoin rally.

That was far worse than Saxo's other major baskets, which are groups of stocks that give investors exposure to a key theme. The second-weakest for performance was next-generation medicine stocks, which fell 6.3%, while e-commerce stocks slid 3.7% as investors rotated out of the technology sector.

It was a very tough month for stocks of bitcoin miners, exchanges and companies with direct exposure to cryptocurrencies. The price of MicroStrategy – a technology firm that holds billions of dollars of bitcoin – tumbled 28% in May. Riot Blockchain, a mining company, plunged 35%.

Yet Saxo's crypto stocks basket fared better than the crypto market itself. Bitcoin lost around 35% against the dollar in May, after Elon Musk's Tesla said it would stop accepting the token as payment for its cars and China signaled a new crackdown on payments. Other tokens such as dogecoin also slid.

"The divergence in performance between bitcoin prices and the crypto theme basket shows that the companies in the basket are not purely driven by cryptocurrency prices," said Peter Garnry, head of equity strategy at Saxo Bank.

Banks such as Saxo are increasingly working out how to offer their clients exposure to the cryptocurrency boom, which has seen bitcoin soar more than 280% over the last year, even with the latest price plunge factored in.

JPMorgan in March said it would start creating debt products linked to the performance of its own crypto basket of stocks, giving investors indirect exposure to the cryptocurrency market.

Yet the recent crash in the bitcoin price has raised concerns that the enthusiasm of institutional investors could now wane.

In May, analysts at JPMorgan flagged "continued retrenchment" by big players. "Institutional investors appear to be shifting away from bitcoin and back into traditional gold, reversing the trend of the previous two quarters," they said in a note.