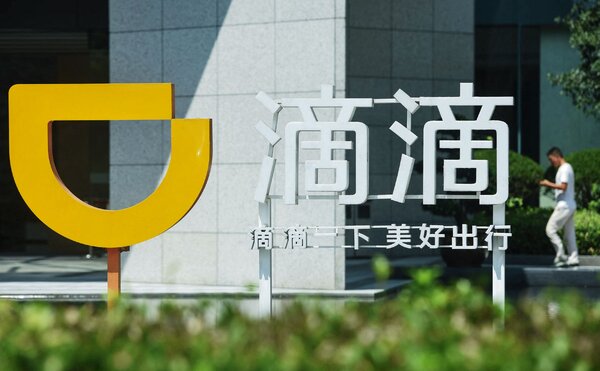 China’s I.P.O. crackdown is quickly zooming beyond Didi Chuxing, the Chinese ride-hailing giant that government officials banned from app stores just days after it sold shares in the U.S. Now, Beijing is imposing new regulatory requirements for all tech companies planning to list their shares abroad and erecting barriers around fintech firms, some of the country’s biggest start-up successes.

At the same time, President Biden is reportedly preparing to warn American companies about the increasing risks of doing business in Hong Kong, further fraying relations between the U.S. and China. As bankers assess what all this posturing means — economics has trumped politics before — DealBook has started to do the math.

A slowdown in Chinese I.P.O.s would hit underwriter fees. Chinese companies listing in New York have been hugely lucrative for Wall Street in recent years. Investment banks have already brought in nearly $460 million in underwriting revenue this year, according to Dealogic. More was expected: Bloomberg estimates that about 70 companies based in Hong Kong and China have been set to go public in New York.

Investment firms’ portfolios could suffer, too. If an American I.P.O. is off the table, at least for now, hedge funds and private equity firms that doubled down on Chinese investments in search of growth may see the value of those holdings decline. (Investment firms could, of course, take Chinese companies public in China, but the shallow investor pool and proximity to the government can make that a less desirable path.) It’s difficult to quantify the exact exposure investment firms have to China, but it looks substantial.

U.S. private equity firms were involved in deals worth $45 billion in Greater China in the five years to 2019, according to PitchBook. Carlyle and Warburg Pincus have been among the biggest investors in recent decades.

Not all investors are spooked by the crackdown in China: “Our stance on China remains unchanged in our optimism,” an executive at Temasek, the Singaporean state investor, told Bloomberg. And local rivals to Chinese tech giants like Didi are taking advantage of the situation to seize market share.

Global authorities are skeptical of Covid boosters. After meeting with Pfizer executives yesterday, U.S. officials said they needed more time and data to determine whether third shots of vaccines would be necessary. The W.H.O. urged wealthy countries to donate doses to poorer ones instead of reserving them for boosters.

The Trump Organization strips roles from its C.F.O. The Trumps’ family business removed Allen Weisselberg from atop dozens of subsidiaries, days after he and the real-estate company were indicted by New York prosecutors for tax fraud. It’s unclear whether that will lead to a bigger executive shake-up.

France punishes Google over its treatment of news media. The country’s competition authority accused the tech giant of violating orders to negotiate with publishers for the right to quote their articles in search results, and fined it nearly $600 million. It’s the latest example of regulators around the world cracking down on American tech giants.

“I think you are a bad human being.”

— Elon Musk, to a lawyer representing shareholders suing Tesla over its 2016 takeover of SolarCity. In typical fashion, the Tesla chief’s testimony at a Delaware court was full of provocative statements: At one point, he said, “To be totally frank, I don’t want to be the boss of anything.”

Not so fast, global minimum tax …

A global minimum corporate tax rate is moving closer to reality, if recent headlines are to be believed. Finance ministers from the Group of 20 formally backed a framework for a 15-percent minimum tax and the European Union signaled it was on board by delaying a digital levy that could have scuttled the agreement.

But there is still a long way to go before legislatures from more than 130 countries agree to the plan. The U.S. and E.U. are among the potential holdouts.

“A key drawback is the complexity of the whole thing,” said Daniel Bunn, a global policy expert at the Washington-based Tax Foundation and a former staff member for Republican senators. The biggest ideological hurdle appears to be that the new approach won’t simplify or offer stability, he said. Those are two things that Republicans, and many business leaders, have long wanted from the U.S. tax code. And the plan would be likely to involve a new tax treaty, which would need a two-thirds majority in the Senate.

Senator Pat Toomey, Republican of Pennsylvania, said in a statement that the “race to the bottom” of countries competing to “get to a tax code that attracts investment and maximizes growth” is one that the U.S. “should be leading, not trying to prevent.”

Ireland, Estonia and Hungary could hold things up in the E.U. Every country in the bloc will have a veto, and those with tax rates below the proposed minimum are skeptical. (Here’s a handy rundown of corporate tax rates around the world.) Oxford Economics recently ran the numbers for European countries’ public finances, and concluded that “the winners will outnumber the losers, with the largest economies benefiting the most.” So France and Germany may exert pressure on smaller holdouts.

Some believe that Ireland is waiting to see whether the Biden administration can pass tax legislation before lending its support.

Even if a deal is achieved, its impact may be modest. Only 78 of the world’s 500 biggest companies would pay more under one of the plan’s two key pillars, according to a recent analysis. In total, the tax would raise an extra $87 billion, with $28 billion of that from Apple, Microsoft, Alphabet, Intel and Facebook. If the entire tax package is approved, it would affect more companies, but it would reduce overall S&P 500 earnings only by about 1 percent. That’s a tenth of next year’s expected profit growth, so “it’s not nothing, especially for a market that has done this well and is on these high valuations,” said Ben Laidler of eToro.

“It’s already a substantial achievement” to have gotten this far, said Will Morris of PwC’s global tax policy team. But for the plan to work in practice, he said, countries will need to reach “not just broad, but also deep agreement.” That could take a while.

‘Black Widow’ is a win-win for theaters and streaming

The number of movie theaters in the U.S. was declining before the pandemic effectively shut the industry for months. And when lockdowns came, many studios prioritized the release of films on their own streaming services, both because they had few other options and to entice subscribers. To some, this shift spelled doom for movie theaters.

“Black Widow” suggests that streaming and theaters could coexist, writes The Times’s Brooks Barnes. The latest Marvel blockbuster made $80 million in the U.S. and Canada between Thursday night and Sunday, with another $78 million in ticket sales overseas. (Disney’s cut was about $98 million.) That means about 17 million people viewed the film in theaters. The movie made another $60 million through the Disney+ streaming service, where subscribers could rent it for $30, on top of their $8 a month fee.

Some view the big turnout on Disney+ as a sign that leverage is shifting to streaming services, Brooks writes, but on the other hand:

The fact that 17 million people decided to leave their bubbles and go sit with strangers in a theater — amid rising coronavirus infections, the result of the Delta variant — when they could just push a button in their living rooms is nothing to sneeze at. For now, theatrical distribution remains a major revenue generator and cannot be ignored if studios want to make money on big-budget spectacles.

Broadcom is reportedly in talks to buy SAS Institute, an analytics software company, for at least $15 billion. (WSJ)

Alibaba is among the companies said to be considering a bid for Unisplendour, a cloud computing business, that could fetch nearly $8 billion. (Reuters)

E.P.A. documents show the agency approved the use of toxic chemicals for fracking a decade ago, despite concerns about their safety. (NYT)

The U.S. will soon send monthly checks of up to $300 per child to most families, as part of President Biden’s plan targeting child poverty. (NYT)

To push back against the use of dark money in Washington, a progressive advocacy group is relying on … dark money. (Axios)

Best of the rest

Timber prices continue to tumble, a sign that post-pandemic inflation may be easing. (Bloomberg)

“Why Jane Goodall Still Has Hope for Us Humans” (NYT)

We’d like your feedback! Please email thoughts and suggestions to [email protected]